Offshore wind activity is experiencing significant growth now in terms of capacity installed. However, the industry is struggling with the costs of development, which have more doubled in 5 years.

The offshore wind market is finding its feet across the globe, with major projects completed and under construction in the UK, swiftly gathering momentum for renewables under the Obama administration in the United States, increasing focus and investment in China, and new projects planned in Germany, Belgium and other European countries.

From virtually nothing in 2000, the industry today can boast 1.5 GW of installed offshore wind capacity, of which 334 MW â€“ more than one fifth â€“ was installed in 2008 alone, see Figure 1, (below). An additional 1.5 GW is currently under construction, and Douglas-Westwood forecasts more than 5 GW will be in the water by 2012. 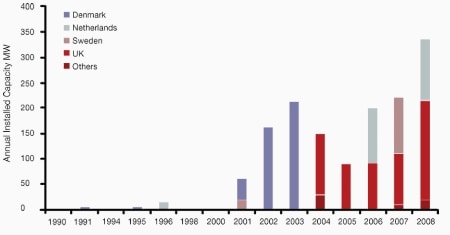 The United Kingdom, in particular, has assumed the mantle of leadership in the industry. With seven operating wind power plants sporting 530 MW of capacity, the UK leads the industry by far. And that gap will grow. The UK has six projects totalling 1.2 GW under construction, and looks to add another 900 MW by 2012.

The offshore industry can trace its lineage to the Danes, for it was Denmark which first championed offshore wind in scale. From 2001â€“2003, Denmark built 500 MW of offshore wind with its groundbreaking Horns Rev and Nysted projects. After taking a pause to gain experience in the operation and integration of wind power into its energy portfolio, the Danes will be back from 2009, and we expect them to add nearly 1 GW of capacity by 2012.

Germany looks to move from a testing and field trial phase to construction of operating wind farms in the next few years. From 2004â€“2008, the country installed only three offshore turbines â€” all near shore. These include a 4.5-MW prototype turbine at Ems Emden in 2004 and a 5-MW turbine installed at Hooksiel in 2008. But Germany is moving past the prototype stage, and its first significant project, the 60-MW Alpha Ventus wind farm, is currently under construction and is expected to be operational by the end of 2009. Germany is will continue to become a key player, and is expected to install 1.4 GW by 2012, second only to the UK globally.