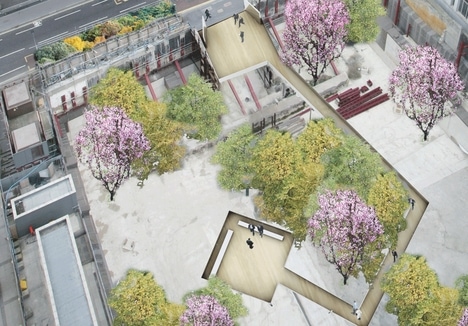 A dozen young architects have been shortlisted for a temporary ideas competition to fill the site of Richard Rogersâ€™ â€œcheese graterâ€, which was mothballed by the developer last summer.

The move by British Land has come as a shock to Rogers Stirk Harbour, which was only told of the plans earlier this month.

Opening up vacant plots is part of a wider initiative by the City of Londonâ€™s planning authority to force developers to turn to alternative uses for sites indefinitely put on hold by the credit crunch.

Shortlisted firms include Young Architect of the Year 2009 finalists Duggan Morris and Glowacka Rennie along with 2007 winner, Carmody Groarke, with submitted ideas for the Leadenhall tower site ranging from a city farm to a viewing platform.

The winning design, which could sit on the site for up to five years, will be announced by competition organiser Wordsearch in the next few weeks.

The Corporation of London is determined not to have the Square Mile riddled with derelict plots and one shortlisted architect said the developer had been â€œbouncedâ€ into the initiative. British Land declined to comment.

Christine Cohen, chairman of the planning committee said â€œWe need something on the site rather than a hole. There are various sites in mind [for similar schemes] in the City.â€

Other high-profile developments across the capital are also looking at temporary uses, including the troubled Chelsea Barracks, which is considering an antiques fair, and Noho Square â€” originally intended as a Candy & Candy mixed-use development â€” which may be turned into allotments.