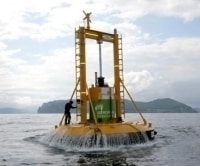 Construction will start next week on the Â£42 million Wave Hub marine energy project in South West England. The Wave Hub, which will be located 10 miles off the north Cornwall coast, will serve as a test bed for wave energy devices by providing an electrical connection from the seabed at a depth of around 50 m to the national grid. Initially, the Wave Hub will have four berths for wave energy devices up to a maximum capacity of 20 MW, but has the potential to scale up to 50 MW in the future. Ocean Power Technologies has signed up to take the first berth when it becomes available to test the performance of its PowerBuoy wave energy converter. The first devices are expected to be deployed in 2011, once the cabling and connectors have been constructed. Starting on Monday, civil engineers will drill ducts from Cornwall coast at Hayle to connect to the subsea cable and a new electricity substation on the site of a former nearby power station. The South West Regional Development Agency (RDA), which has provided Â£12.5 million in funding, is developing the project with additional financial support from the UK government and the European Regional Development Fund Convergence Programme. The Wave Hub project will be led by Guy Lavender. â€œThis milestone is the culmination of more than six yearsâ€™ work by the RDA and its partners,â€ says Stephen Peacock of the South West RDA. â€œOur aim is to create an entirely new low carbon industry in the South West.â€