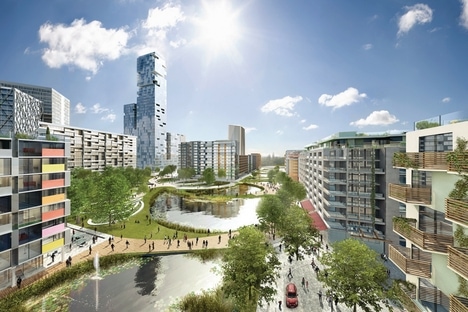 Six firms are left in the running for the final two main contracts to be let on the Â£1.1 billion Athletesâ€™ Village project for the 2012 Olympics.
Galliford Try, Brookfield Europe and Miller Construction are understood to be shortlisted for the contract, with an estimated value of Â£88 million, to build plots N13 and N26. It is thought that Willmott Dixon was also invited to tender but decided not to price the job. A source at one contractor said that Galliford Try appeared to be the frontrunner to win the job, which it is believed will see 185 units built on N13 and 243 units built on N26. The source added: â€œThe big names you would have thought would be there are not.â€ Sir Robert McAlpine, Morgan Ashurst, Carillion and Balfour Beatty subsidiary Mansell all featured on a 15-strong longlist for remaining Village contracts published by the Olympic Delivery Authority in August, but seemingly missed out on all of them. Byrne Group, P Elliott and Bennett Construction are understood to be the final three in the running for the contract to build the only other remaining plot, N14. Winners of both deals are expected to be announced next week, possibly along with some smaller contracts. Bourne Group is thought to have scooped the deal to build the car park for the Village, while Bam Construct is the preferred bidder to build Chobham Academy on the site. The academy will specialise in teaching English, drama and music. But during the Games it will house athletes and Olympics officials. Developer Lend Lease is building five of the Villageâ€™s 11 blocks itself; Ardmore is building N2; and John Sisk and Son will build N9 and N10. Olympics chief John Armitt this month rubbished speculation that aggressive tendering had slashed the cost of the Athletesâ€™ Village. With the recession biting, it had been claimed that prices had come in well below estimates for the final handful of main contracts on the prestigious project. It had also been suggested that the Government would be pleased with savings on the Village â€“ originally estimated at Â£1.1bn â€“ after it was forced to pump Â£324m into it earlier this year. But Mr Armitt, chairman of the Olympic Delivery Authority, said this funding had been offset by underusing inflation allowances, with the recession having kept building costs down. He added: â€œThere has been no significant lowering of the cost of the individual blocks. The Â£1.1bn includes many costs outside the blocks themselves. â€œMuch of the money for the village has gone into infrastructure. There are covered tunnels, and a railway running under the blocks.â€