TWO workmen have died after falling from railwayÂ bridges in Scotland within hours of each other. One man plunged 150ft from a ladder on the Forth BridgeÂ and the other fell from a ladder on the Tay Bridge. Police named who died in the Forth Bridge fallÂ as 52-year-old Robert MacDonald, of Baillie Avenue, Harthill, West Lothian, and the Tay Bridge victim as David Rodger, 44, from Cowdenbeath. 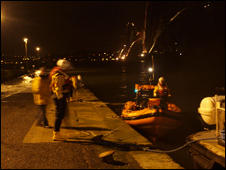 Mr MacDonald was a member of the painting team working on the north side of theÂ bridge, which connects South and North Queensferry near Edinburgh, when he fell just before 9pm on Wednesday.Â  He landed on scaffolding and died at the scene.

In the second accident less than 10 hours later, Mr Rodger fell around 6ft from a ladder on to a ledge under the Tay railÂ bridgeÂ at around 6.40am today.

Police, paramedics and the coastguard were involved inÂ bothÂ rescue efforts. A British Transport Police spokeswoman said: “Inquiries into the circumstances surrounding the man’s death are ongoing. A report will be sent to the local procurator fiscal.”

Both men were working as contractors for Network Rail.

David Simpson, Network Rail route director for Scotland, said: “It is with great sadness that we have received news of the deaths of two of our contractors who were working on the Forth and TayÂ bridges. “These tragic events have deeply shocked and saddened everyone linked to these projects. “Such events have become extremely rare in the last decade as a result of rigorous safety regimes on bothÂ bridges. An investigation into the causes of these accidents is already under way.

“Our thoughts today are with the family, friends and co-workers of these two men.” Rail accident investigators had been informed, police said.