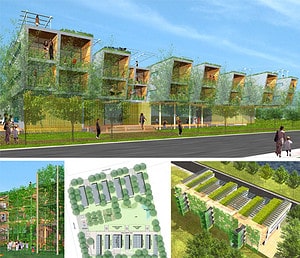 Up to 65,000 jobs could be created in the green housing industry, which will include construction, if plans to transform British homes get underway.

The government has revealed that over the next ten years homes will be made more energy efficient, making them cheaper to run, warmer and more comfortable.

Up to seven million households are set to benefit from the green upgrades by 2020, something the construction industry could be keen to take part in to create a more sustainable housing stock.

According to the Department of Energy and Climate Change (DECC), a quarter of the UK‘s emissions come from homes.

“There’s a driving force behind the green homes movement with homeowners, developers and local authorities lining up to get on board,” said John Healey, housing minister.

Under the proposals six million homes should be insulated by the end of 2011.

DECC was created in 2008 and has seven strategic objectives including reducing greenhouse gas emissions in the UK, allowing businesses to benefit from a low-carbon future and ensure the country’s future energy supplies are secured.