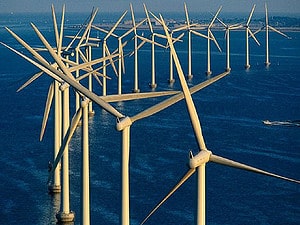 The US conglomerate General Electric (GE) announced plans for an offshore wind turbine manufacturing plant in Britain, creating up to 2,000 jobs. The company said it had not yet decided where to build the facility, but its plans would result in about Â£100m being invested in Britain, creating clean energy jobs at both the new site and in the supply chain. The UK is well placed to harvest clean energy from powerful sea winds, but the closure of a Vestas plant on the Isle of Wight last August was highly embarrassing for ministers, leaving Britain without a significant turbine manufacturer. . The construction of thousands of huge offshore turbines is a key part of government plans to meet its commitments to cut greenhouse gases, as well as ensure the continuity of energy supply over the next decade as nuclear and coal-fired stations reach the end of their life. GE’s plans are linked to an announcement in last weeks budget of a Â£60m competition to help develop port facilities for the offshore wind industry. “This investment is tied to the successful deployment of the UK government’s port development fund,” a company statement said. The company said the project will form part of a â‚¬340m (Â£305m) investment in Europe’s wind energy industry over 10 years. In addition to the UK manufacturing site, it plans to build development centres in Norway, Sweden and Germany. GE’s UK managing director, Magued Eldaief, said: “We believe offshore wind has a bright future. These investments will position us to help develop Europe’s vast, untapped offshore wind resources.” Lord Mandelson, the business secretary, said: “This is great news from GE, a vote of confidence in UK low-carbon manufacturing which should create a huge number of jobs.” The climate and energy secretary, Ed Miliband, said: “We’re creating the right conditions and incentives to maximise the potential of our wind resource.” Greenpeace policy director, Doug Parr, said: “Clean technology is set to be the growth industry of the 21st century, and this announcement shows that, with the right incentives from government, Britain could be in pole position to benefit.” Tom Delay, chief executive of the Carbon Trust, said: “GE’s announcement turns the vision of the UK as an industrial hub for the offshore wind industry into a reality â€¦ the offshore wind industry could be employing 70,000 people in the UK by 2020, creating a net economic benefit of Â£65bn over the next 40 years.”