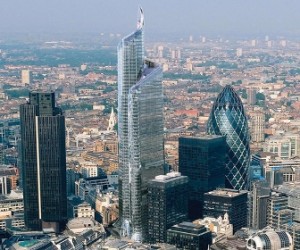 The 72-story Pinnacle tower in London’s business center, designed by Kohn Pedersen Fox (KPF) Associates, will feature the highest viewing platform in London, when it opens in 2013.

Also known as the Bishopsgate Tower and the Helter-Skelter, the Pinnacle skyscraper, spiraling 288 meters upward from its base, will form the apex of an emerging cluster of tall buildings in the center of Londonâ€™s financial district. The Pinnacle will feature the highest viewing deck in the UK and the fourth highest in Europe, accessible to the public.

Pinnacle will feature reopening of a ground-level pedestrian passageway and will link a number of public spaces along Bishopsgate and St. Mary Axe, in an attempt to make substantial contribution to the public realm.

The tower, neighboring Norman Foster’s Swiss Re building, features a triple-level restaurant at 263m, a five-floor-high public mezzanine level and a cascade of open-air terraces starting on the 44th floor.

KPF has incorporated sustainable systems to the towerâ€™s design. The aerodynamic shape of Pinnacle helps in enhancing the performance of the ventilated faÃ§ade, which is made of two layers of clear glass. These two glass layers are an inner, sealed skin and an outer, un-insulated â€˜snakeskinâ€™ layer made of repetitively sized, overlapping rectangular glass panels. The breaches between the panels permit air flow into the cavity and also allow operable windows to ventilate the offices. The outer layer of glass offers protection against the wind. The Pinnacle will contain more solar paneling than any other building in the UK.

The twisting design of its roof, and the curling patterns in the facade, are inspired by various organic forms in nature such as armadillos, mushrooms, and seashells.

Upon completion, the scheme is expected to take the title of the tallest office building in London, which is now enjoyed by 1 Canada Square, Canary Wharf. When topped out at the end of 2012, Pinnacle will become the second tallest building in the UK, after the 310m Shard London Bridge, which is due for completion in May 2012.