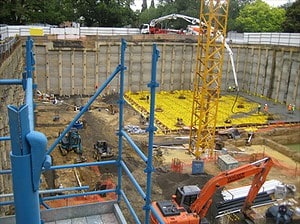 New PMI research shows that UK construction activity moved into growth during March for the first time since February 2008. The seasonally adjusted CIPS/Markit Construction Purchasing Managersâ€™ Index (PMI) recorded a score of 53.1, rising from the previous monthâ€™s reading of 48.5. According to the report, growth of the sector principally reflected a rise in new orders.

Of the three broad UK construction subsectors examined, house-building showed the strongest rise in activity. In addition to residential construction, commercial-based activity also increased during March, with growth reported for the first time since February 2008.

However, the civil engineering sub-sector, where activity is typically driven by public spending, remained in decline during March. Moreover, the pace of contraction was â€œmarkedâ€.

â€œIncoming new orders increased during March for the first time in four months, and only the second time since February 2008. Constructors attributed the rise in new business to the increased success of tenders. However, there were reports that opportunities to tender remained low when compared to pre-recession levels,â€ the PMI stated.

â€œA further sharp decline in employment within the UK construction sector during March highlighted some fragility in the current upturn. Job cuts were largely attributed to redundancy programmes, with staffing levels showing no signs of stabilisation despite the rises in activity and new orders.â€

The study went on to report that, as activity grew, input purchases increased. The rise in purchasing activity was only marginal, although was the first in twenty-five months. Subsequently, suppliersâ€™ delivery times lengthened, as vendors had insufficient operating capacity to accommodate increased demand for purchases. There were also reported shortages of certain items.

David Noble, chief executive officer at the Chartered Institute of Purchasing & Supply, said: â€œThough itâ€™s great to see the UK construction sector turn the corner after two years of relentless contraction, itâ€™s still very early days. The recession hit construction the hardest and because the industry is operating from such a low base, this upturn may be shortlived.

â€œPurchasing managers noted an emerging public/private sector divide as the General Election looms closer. While overall industry improvement was bolstered by private sector expenditure – especially in the housing and commercial sectors – itâ€™s worrying to see civil engineering contracting, given that mooted public sector spending cuts are yet to kick in.â€

Sarah Ledger, economist at Markit added: â€œMarch PMI data signalled growth of activity within the UK construction sector, the first such expansion in over two years. This was supported by rising new orders, as private sector demand increased.

â€œHowever, the impending election and potential cuts in public spending continued to fuel uncertainty over future business prospects. Highlighting this, employment within the sector fell further, despite the rise in business activity. Nonetheless, for Q1 as a whole, UK construction activity was broadly unchanged, suggesting that the sector will no longer drag on GDP.â€