FOR ALL BUILDERS & CONSTRUCTION WORKERS OUT THERE! WHY NOT DIVERSIFY?

Steve was like a lot of people working a trade in the Construction Industry, due to the economic climate he was out of work more than in it. One day he saw an advertisement for Sitemaster Software, this piqued his interest as it was something allied to building that he knew and as he already carried out his own surveys for estimating purposes he thought that the added bonus of being able to draw up accurate floor plans
would give him another opportunity to earn a living doing something he already had an interest in and which could help in his normal job when things picked up. Sort of kills two birds with one stone!

So what did he have to loose, he sent off for more information and agreed to a FREE NO obligation demonstration. What Steve witnessed was professionally-finished building floor plans, area estimates and inspection drawings using a Bluetooth handheld laser talking directly to the software held on a UPMC (Ultra Mobile PC) tablet, he saw that there was no longer any need to take measurements using tape
measures, no need to write any notes or draw pencil sketches anymore, the dimensions are instantly inserted into the drawing programme and it draws the lines in real time â€“ On Site!

Steve stated at the time “I have experienced first-hand the immediate gains that Sitemaster Building software can provide to construction and building information mangers in terms of accuracy, speed and cost-savings”

He was told of how this software had been instrumental in saving time and costs on many projects around the world, “On a recent service project, I was contracted to verify a commercial lessee’s office square metreage and was able to determine irrefutably that they were being overcharged by more than 25 square meters on their contract”. Quite a rental saving over a period of a few years. It is obvious that
where commercial office space commands a premium, the cost-savings to the lessee will be significant over time and positively impact their cash flow each month” Just one of the ways this software can be used effectively.

Building Talk recently commented “Sitemaster Building is an amazing application, and is generating a lot of interest in the marketplace”.

Steve was so impressed by what he was shown, that he decided to buy there and then and take up the optional offer of a days training. This was carried out in due course and Steve immediately put this software/ kit to good practice. In fact he was in touch with some old clients who gave him work from time to time, construction work, but they had none available just now, so he offered his services as a surveyor
and offered to draw up floor plans of some of their property portfolio, he knew through the grapevine that they needed this due to recent changes in legislation, the two negotiated a price and off Steve went to start his first proper floor plan survey. The first building he worked on took him some time, he was after all learning as he went along, but by the time he started the second project he had ironed out all the queries
and problems he was having and with the help of the training he had received and the telephone support from the company, he was well on his way. 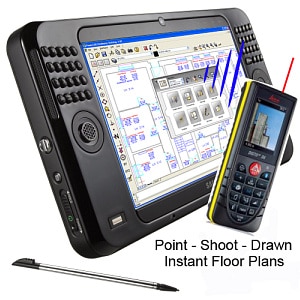 It quickly dawned on him that there was a real opportunity here to offer this as a full time service and make some good money along
the way. What started off as an attempt to try and earn a bit more money due to lack of construction work, had now turned into a
possible future gold mine offering his services of providing finished, accurate floor plans quickly and efficiently both for his own clients and for others. He had now in effect gone from a pretty ordinary builder to a much sought after professional member of the construction
industry, more or less overnight, he now charges his clients on a per square metre basis for most projects as he has now got to a point where he can produce nearly 1000 sq metres per day on a large project.

Of course producing accurate floor plans is one thing, but the Sitemaster Software is so good it also works out area, volume and perimeter calculations of rooms, it also automatically and in the background builds up door and window schedules, lists of radiators, plug points, and in fact anything else you collect along the way, the data collection feature of this programme is ideal for Asset and Facilities Managers.

Along with the floor plans, Steve now finds he can charge for providing door and window schedules, that for most traditional surveyors/architects can take hours or even days to produce, takes Steve seconds with the push of a button. The programme does this all automatically for him, his earnings are now rising exponentially as he finds more ways and new markets to put this programme to work for him.

Steve has since shown this to some of his fellow workmates on the construction site and comments: “Once people see Sitemaster in action and witness the finished results, they can’t believe they have been using a tape measure and paper for so long”. “Architects, designers – anyone wanting to create as-built drawings can now complete the task in record time without leaving the clients site. Better yet, there is no need to send two people to a site and finished drawings can be generated up to 10 times faster than traditional measuring-tape and paper methods.”

Profiled in a recent Microsoft white paper, Sitemaster is claimed to be the first system of its kind to automate the creation of wireless, laser-generated as-built floor plans, area estimates and building inspections for architects, appraisers, contractors, engineers, estimators, facilities managers, floorplanners, estate agents and other professionals involved in the design, construction and management of
buildings.

“Sitemaster provides the missing link for thousands of potential clients”.

Now it is time for you Construction Tradesmen who are maybe looking for other ways of earning a living, to try this for yourselves, why not? What have you got to loose? It worked for Steve, why shouldn’t it work for you?

For more on the Sitemaster range of products, please visit:
www.mobilecadsurveying.co.uk