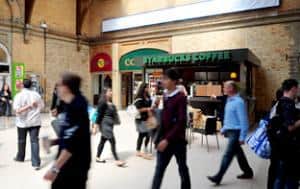 In what could be the first case of a branch of Starbucks disappearing from our towns and cities, commuters to and from one of northern England’s most historic railway stations will have to get their morning pick-me-up from somewhere else after planners ruled that character was more important than cappuccino.

The Starbucks kiosk at York station has been forced to close after planning inspectors upheld an earlier council decision that it spoiled the “symmetry and carefully considered proportions” of the station’s former ticket hall, which dates from 1877.

The coffee company maintained that the kiosk was a free-standing structure and was not fixed to the building, therefore it did not form an alteration or extension to the Grade II listed building.

Inspector Alan Novitzky ruled the Starbucks hut constituted a “substantial intrusion” into “a transition space between the entrance portico and the railway concourse” and “had a solid, heavy, four-square presence and a darkish appearance.” He appreciated the usefulness of such customer facilities, but believed a less intrusive form would be more appropriate.

“It is what makes York special,” he told the Press. “We can’t let large multinational companies jeopardise this, as it means York will no longer be special. Fewer people will visit here and our economy will suffer.”