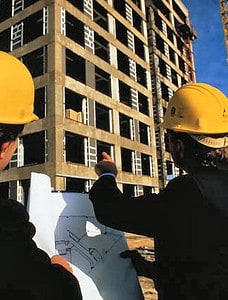 Britain’s economy grew almost twice as fast as expected in the second quarter driven by service sector growth and a dramatic rebound in the construction sector.

The Office for National Statistics said GDP rose a quarterly 1.1% in April to June, compared with a forecast for 0.6% growth. It was almost four times the pace of 0.3% in the first quarter, and the highest for four years.

The pound rallied and government bond futures sold off as traders raised their bets of interest rates rising sooner rather than later.

The ONS said output in the construction sector, one of the hardest hit by the recession, jumped 6.6% on the quarter, the biggest rise since 1963 and rebounding after poor weather hit activity at the start of the year. But overall the headline jump was due mainly to increases in business services and finance. Service sector output rose 0.9%, three times the pace in the first quarter. Output in the production industries increased 1.0% as a widely expected rise in manufacturing offset falls in mining and utilities.

On an annual basis, GDP was up 1.6%, the biggest rise for more than two years.

The number, the first estimate of three from the ONS, will support the case of those Bank of England policymakers who are keen to tighten policy sooner rather than later. With inflation well above its government-set target, monetary policy committee member Andrew Sentance has already called for a rate hike from 0.5% to 0.75% at the last two meetings and comments from some of his colleagues suggest they could join him.

“Taking account of the fact that we also had some better numbers coming out earlier this week, taking account of the debate going on in the MPC, I think it is likely to accentuate the divides,” said Michala Marcussen, global chief economist at SociÃ©tÃ© GÃ©nÃ©rale.

The improvement in economic growth was much stronger than even the highest forecasts from economists in a Reuters poll ahead of the release. Still, many economists cautioned that there were significant obstacles to growth picking up further.

“The second quarter’s much stronger than expected rise in UK GDP is a pleasant surprise, but is likely to prove as good as it gets as far as the pace of economic recovery is concerned,” said Jonathan Loynes, chief European economist at Capital Economics.

“Two reasons not to get too over-excited. First, while strong by any ordinary standards, the second quarter’s gain in GDP is less impressive in the light of the sharp falls seen during the recession. There were two quarters when GDP fell by more than 2% and activity is still over 4% below its first-quarter 2008 level. And second, with recent business surveys weakening and the fiscal squeeze looming, the second quarter looks very likely to be the peak in terms of the pace of growth â€“ expect a much weaker second half.”