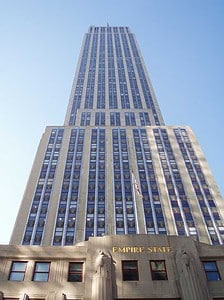 When New York’s tallest building, which stands at 1,454ft tall, was bought by Malkin Holdings in 2006 it was in a state of disrepair. But the condition of the building gave its owners an opportunity.

“When we took control of it, the place needed to be fixed. It was broken,” Anthony Malkin, president of Malkin Holdings, told the Guardian. The solution was an environmental renovation, he said.

“We’re doing this [making the Empire State greener] not because it’s the right thing to do, but because it makes business sense. If we don’t reduce our energy consumption, we will lose money and be less competitive against China, India, Brazil and the other expanding economies,” Mr Malkin said.

As well as new windows, four central chillers have been replaced and smart air circulation systems have also been put in as a low-energy means of heating the building in winter and cooling it in summer.