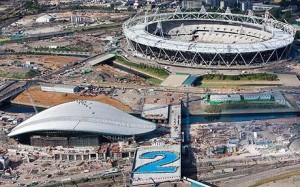 London won the right to host the 2012 Olympics with the economy booming and the FTSE 100 at 5,229. Five years later, following one of the deepest recessions in history and with the stock market still struggling to clear 5,500, the value of the Games to British businesses has evolved to an extent few could have imagined.

As the banking system teetered on the edge of collapse in late 2008, Tessa Jowell, then the Olympics Minister, questioned whether London’s bid to host the Games would turn out to be a costly mistake. “Had we known what we know now, would we have bid for the Olympics? Almost certainly not,” she said. The Â£9.3bn bill was steep for a country whose national debt was heading for the one trillion pounds mark.

However, as the UK edges ever closer to July 2012, John Armitt, chairman of the Olympic Delivery Authority, insists the Games will be a “fillip” to the economy and that the recession has been a “curate’s egg” for the project.

“When we won the Olympics the economy was booming but within about six months the reverse was true. Without the recession it [construction of the Olympic venues] would have been challenging in terms of inflation and getting labour on site. But equally, we wouldn’t have had to use our contingency fund for the Olympic Village.”

Armitt joined the ODA in September 2007 from Network Rail, where as chief executive he presided over the rebuilding of Britain’s railways â€“ but at more than double the costs to the taxpayer.

As chairman of the ODA, he is responsible for overseeing construction of the venues and infrastructure that will host the Olympics. Today, 10,000 workers are on-site at the Olympic Park in Stratford, and the ODA aims to hand the keys over to the organising committee, Locog, late next year.

“Our biggest achievement is doing what we said we would do,” says Armitt, insisting construction remains on-time and on-budget.

In 2010, 29 listed British companies have referred to the 2012 Olympics as having a material positive impact.

This includes 10 companies involved in construction such as WS Atkins, the engineering design provider to the Games, but also businesses in transport, retail and other industries.

For example, Hornby, the model manufacturer, has launched its first range of London 2012 products, while William Sinclair Holdings, a horticulture group, has won a contract to provided soil to the Olympic Park.

Although a spokesman for William Sinclair declined to comment due to ODA restrictions, it is believed the company has been tasked with producing different soils capable of hosting the array of global flowers planned for the Park.

Six property companies have also already stated they expect to benefit from the Olympics. For example, Telford Homes, the housing developer, says the regeneration around the Park is boosting demand for new homes in East London, while Capital & Counties owns Earls Court Exhibition Centre, which will host the volleyball tournament

Overall, according to a study for the Government by PricewaterhouseCoopers in 2005, the Olympics will boost the London economy by Â£5.9bn and the rest of the UK by a further Â£1.9bn.

Outside London, Â£1.1bn of the benefit will come during the event itself as tourists arrive in the country. But for London, the overwhelming majority of the benefits â€“ Â£3.4bn â€“ will come before the Games, with Â£1.6bn after it. This is primarily due to spending on construction.

But while the billion pound figures look impressive, the survey suggests that as a percentage of GDP the impact of the Games is limited. In 2012, for example, the Olympics are forecast to add just 0.066pc to the UK economy and 0.258pc to London.

Mark Ambler, a director in the economics team at PwC who produced the report, says the recession means those figures now represent a significant underestimation. “It has changed for two reasons,” he said. “The Games will cost more than foreseen but also the value of the spending is greater than foreseen.”

When the Olympic contracts were first tendered, private companies’ order books were overflowing and their appetite to work on high-profile public projects had been damaged by debacles at Wembley and the Millennium Dome.

However, following the credit crisis, the ODA contracts have emerged as valuable and stable work due to construction halting elsewhere in the UK.

Armitt and his team have learned from previous public project failures, introducing target price contracting as a way of boosting the relationship between the client and contractor. This agreement means a design-and-build price is agreed prior to construction, with the ODA and contractor then sharing any upside or downside.

So far, the ODA has issued 1,300 contracts worth Â£5bn. Of those, 98pc have been won by British companies â€“ with most based in the South East, Midlands and the North West â€“ while small and medium-sized businesses have secured 65pc of the work.

“One of things that worried us was with the recession was that we could have failures [in the supply chain],” Armitt explains. “We have tried to get an environment where we help people.”

As yet, no Olympic contractor or sub-contractor has gone bust. Companies have been helped by the ODA pledging to make payments within 18 days rather than the industry standard of 30, and by pushing tier one contractors to pay promptly.

According to Mr Armitt, the ODA has also been careful not to “overload” businesses with too many contracts.

However, the recession has still scarred the Olympics. The ODA is having to build the Â£1bn Olympic Village and Â£350m media centre itself because the private sector was unable to raise the funds, while land sales are expected to raise Â£150m less than expected because of falling values.

The Olympics has also failed to escape public spending cuts. The Coalition Government has shaved Â£27m from the ODA budget, although Armitt insists these savings will be found without changing the nature of the venues or infrastructure.

With Â£300m of contracts still to be awarded â€“ including construction of the BMX and shooting facilities â€“future challenges still lay ahead. Terminal 5 and the Millennium Dome, Armitt warns, are haunting examples of complex projects that were successfully constructed but suffered damaging publicity on completion because of operational problems.

“It is critical for us that we don’t fall over in the next nine months,” he cautions.