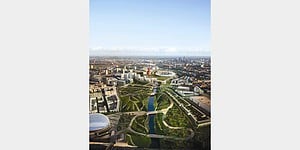 Legacy company slams original masterplan and unveils changes to post-2012 housing.
A nine-strong team of practices, including Maccreanor Lavington, Caruso St John and Panter Hudspith, has drawn up a radically revised masterplan for the Olympic Park after the 2012 games, replacing a forest of â€™blandâ€™ contemporary residential blocks with designs inspired by traditional London terraces. Unveiling the legacy scheme on Thursday, Olympics chiefs were openly critical of the original masterplan created by Edaw (now Aecom), Allies & Morrison and Dutch practice KCAP. Andrew Altman, chief executive of the Olympic Park Legacy Company, said it was choked with blocks of small flats, and temporary buildings, while chair Margaret Ford said it lacked character. â€œWhen we looked at the first masterplan there was nothing that said to me: â€™This is Londonâ€™, she said. â€œIt could have been anywhere. It was all high-rise and fairly bland.â€ Nonetheless, the three firms have been retained to help rework the proposals, along with Witherford Watson Mann, and landscape architects Vogt and West 8. The density of the original masterplan has been slashed by 20%, from around 10,000 homes to 8,000, reflecting a greater emphasis on larger family houses with private gardens. The legacy phase of the 2012 games will now comprise five distinct districts, planned around squares and Nash-inspired crescents. Only a handful of buildings will exceed five storeys. The proposals will be submitted to the Olympic Delivery Authority for planning consent next summer and it is hoped that the first tranche of work – houses sited close to the Olympic Village – will go on site in 2014. A spokesman for the legacy company said it was too early to say how or when firms would be selected to draw up detailed plans for parts of the 243ha site. The design U-turn has been backed by London mayor Boris Johnson, who has railed against the proliferation of Â³hobbit homesÂ² across the capital, and voiced his support for an architecture that builds on the traditional London vernacular. It also mirrors the redesign of the contentious Chelsea Barracks site, where Richard Rogersâ€™ proposed slab blocks have been replaced by a highly traditional â€œgarden squareâ€ design by Squire & Partners, Dixon Jones and Kim Wilkie Associates.