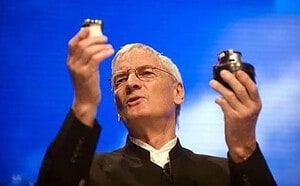 Sir James Dyson ratcheted up the pressure on the Government to improve tax breaks for commercial research and development last night as he warned that Britain faced “an increasingly fierce trade war” in a speech that evoked the collaborative engineering spirit of the Second World War.

The vacuum cleaner entrepreneur said the Government had to increase R&D tax credits for high-technology firms to 200pc of the cash they spend developing new technologies.

To pay for the incentive, Sir James said fewer companies should benefit. “Right now it’s the banks and the service sector that claim two-thirds of the tax credits. The criteria must narrow,” he told an audience at the Roll Royce science prize ceremony in London.

David Cameron asked Sir James to review Britain’s capacity to generate and exploit technology last year. The Conservatives accepted his recommendations ahead of the general election.

However, Sir James told The Daily Telegraph last night: “It’s essential we put stimulus in place for long term research and development, sooner rather than later. While it’s important we cut the deficit, we also need to think about building long-term sources of wealth.”

Sir James said Government attempts to cut the deficit could “galvanise” the country into action. “Austerity forces you to be more resourceful and creative,” he said, before making his speech. He later claimed: “War is good for engineering. It is good for science. It is good for invention. Look at what we achieved in World War Two. Was any period more creative? Jets. Computers. Atom bombs. Radar. All began as military machines. But were soon applied to revolutionise civilian life.”

Sir James also demanded a “cultural change” in attitudes to engineering, stating “The City has no interest in engineering. Ten years ago it fell in love with Lastminute.com, lured by fashionable web entrepreneurs. But heavy industry â€“ like Rolls-Royce â€“ generates more cash, more exports, more technology and more jobs.”

The R&D tax relief for large companies stands at 130pc of qualifying expenditure and 175pc for small companies.

The CBI, the employer body, has said the R&D tax credits should be available to “all companies”.