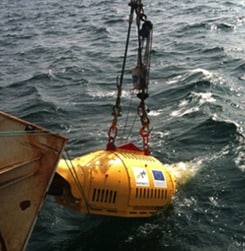 The pioneering Wave Hub marine energy project has been â€˜plugged inâ€™ for the first time since its installation over the summer and is officially open for business. Wave Hub has created the worldâ€™s largest test site for wave energy technology by building a grid-connected socket on the seabed 16 kilometres off the coast of Cornwall in South West England, to which wave power devices can be connected and their performance evaluated. Yesterday (November 2), the complete system underwent its first full test when it was connected to the grid network via a new substation that has been built at Hayle, where Wave Hubâ€™s 33kV cable comes ashore. Wave Hubâ€™s general manager Guy Lavender, speaking today at the RenewableUK annual conference and exhibition in Glasgow, said: â€œWeâ€™ve been continually testing the integrity of the whole system during the installation process but yesterday was the first time it was fully energised and plugged in to the grid, and Iâ€™m delighted to say that it went without a hitch. â€œFrom today the system will be permanently energised and monitored, so Wave Hub is well and truly open for business.â€ The penultimate stage of Wave Hubâ€™s installation is expected to be completed today (Nov 3) when the last of 177 concrete â€˜mattressesâ€™ is laid on top of the subsea cable. The cable itself is buried under the seabed to around five kilometres offshore and thereafter has been covered with 91,000 tonnes of rock. The mattresses are being laid at regular intervals on top of the rock to ensure the cable is secure. Next week a marker buoy will be installed to record Wave Hubâ€™s position, and that will be the final part of the physical installation. The Â£42 million Wave Hub project has been developed by the South West RDA and is a cornerstone of its strategy to develop a world class marine energy industry in South West England and the UK. Guy Lavender added: â€œThere has been some speculation about Wave Hub’s future given that the South West RDA is due to be abolished by March 2012. The future of Wave Hub and its ongoing operation are not in doubt, and the project is fully funded as we continue to seek commercial customers. â€œWhat we don’t yet know is who will own the asset when the RDA is gone, and that is being discussed. But that has no impact on Wave Hub’s continued role as a vital facility for the development of the wave energy industry in the UK and overseas.â€ Wave Hubâ€™s first customer will be Ocean Power Technologies, using its PowerBuoy wave energy converter. Wave Hub consists of a 12-tonne steel chamber on the seabed in 55 metres of water some 16kms offshore connected to land via an armoured subsea cable. The chamber splits the main subsea cable into four 300 metre â€˜tailsâ€™, each of which serves one of the four berths available at Wave Hub. The project holds a 25-year lease on an eight square kilometre area of sea, and each berth measures 1km by 2km. The Wave Hub site boasts one of the best wave climates in Europe and the system has a capacity of 20MW, but is designed to be scaled up to 50MW in the future. Wave Hub is being funded with Â£12.5 million from the South West RDA, Â£20 million from the European Regional Development Fund Convergence Programme and Â£9.5 million from the UK government.