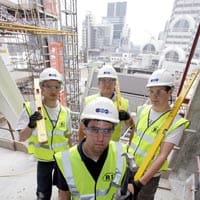 A major trade union has called on the government to redesign its policy relating to apprentices in building firms.

The Union of Construction, Allied Trades and Technicians (Ucatt) noted there are far fewer young people aged 16 to 19 presently employed in the sector than there were since the beginning of the economic downturn, falling from 119,330 in 2008 to 56,781 in 2010.

“Unless new young workers are recruited and properly trained, then the industry will suffer severe skills shortages, productivity will be affected and future growth will be reduced,” Ucatt acting general secretary George Guy predicted.

He called on ministers to force firms to hire and train apprentices to combat this decline.

Ucatt is the largest construction sector union in the UK and the Republic of Ireland, with over 500 branches.