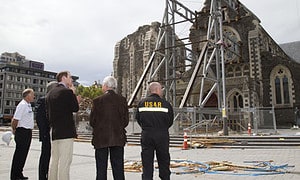 Settled and built in the mid-19th century by Canterbury pilgrims, Christchurch has long been viewed by many New Zealanders as the most English of its cities. Now, in the aftermath of two earthquakes, one last September and another in February this year that killed 181 people, Christchurch representatives are returning to the motherland in the hope of attracting a new wave of skilled migrants to help rebuild New Zealand‘s second-largest population centre.

A team from the regional Canterbury Employment and Skills Board (CESB) has travelled to the UK to exhibit at two recruitment expos organised by Opportunities New Zealand. One is in London this weekend and the other in Manchester on 19-20 November. Both have been organised with a view to recruit many of the 30,000 skilled workers needed for construction, engineering and IT roles in Christchurch over the next 10 years.

The February earthquake destroyed much of the city’s business district and about 30,000 homes. The New Zealand government recently estimated the damage bill at NZ$20bn (£10bn).

Alex Bouma, CESB’s deputy chairman, said tapping into the UK‘s skilled workforce would be crucial to successfully rebuilding the city. “There is going to be a huge economic opportunity over the next three to 10 years. The UK expos will play a crucial role in providing businesses with the employees they need.”

Such is the scale and long-term nature of the required rebuilding work, it is hoped that many workers will be persuaded to resettle permanently in New Zealand. A spokesperson said relocation costs would be available for some of the higher-level opportunities, which would be discussed on a case-by-case basis.

The main draw though, seems to be the unique opportunity to be part of the rebuilding of a major city, as well as a chance to permanently escape the stagnant UK jobs market and the gloomy future economic forecasts.

Grant Harris, a construction industry manager working on the Christchurch rebuild project, said: “It’s a once-in-a-lifetime chance. It’s going to be incredibly exciting, particularly the chance to start from scratch with the construction of cutting-edge and innovative, energy-efficient buildings.

“With at least 10 years of rebuilding ahead, the region offers great employment security for skilled construction industry workers.”

The Canterbury Skill Shortage List, a resource set up by New Zealand’s Department of Labour, details a wide range of construction and engineering roles ranging from scaffolders, electricians and upholsterers to infrastructure project managers and regional planners. Civil, electrical, structural and telecommunications engineers are also in high demand.

With the UK economy emerging slowly from the recession and focus intensifying on uncertainties in the eurozone, the Christchurch representatives hope to emphasise the “unprecedented opportunities for employment, career progression and involvement in a significant city redevelopment”.

Yet, while New Zealand basks in the glow of its recent rugby union world cup triumph – a recent government survey claimed nine out of 10 residents were satisfied with their lives – migrants should be aware the country is not without economic problems. Wages increased by 2.0%year-on-year, while the price of consumer goods increased 4.6% in the corresponding period.