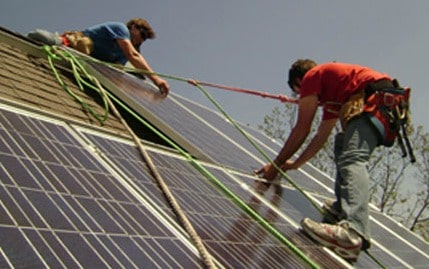 The results of a study reveal that almost three quarters (71%) of British homeowners with their own roof say they do not know how much the renewable energy subsidy scheme; the feed in tariff (FIT) is costing an average household.

This is one of the findings from a study released today by solar panel manufacturer, Sharp Solar. This alarming lack of awareness comes at a time when the cost to households is being cited as a key reason for Government cuts to the tariff, which is being slashed from 43p per kWh to 21p per kWh next week (12th December).The research also found that over a quarter (27%) of respondents believe households are paying much more to support the FIT than is actually the case, with assumptions from those polled ranging from £12 to over £1200 per year. In fact, official figures released by the Government confirm that the current cost to every household energy bill is approximately £1.40 per year.Speaking following the release of the findings, Andrew Lee, Head of International Sales at Sharp Solar said: “This research clearly underlines the general lack of awareness amongst UK energy bill payers. This is hampering consumers, businesses and the government from making a rational, informed choice about the most appropriate rate at which to set the tariff. The FIT needs to be more flexible and intelligent to respond to the solar panel (PV) price reductions but these ill-informed cuts will stop the industry dead in its tracks and undo the years of good work that has been invested in skills, infrastructure and businesses.”Of those polled, solar is shown to be the preferred technology, of those supported by the FIT, with 40% preferring to see more domestic solar power in their community. ”However, over half (55%) of homeowners with their own roof that had considered installing solar panels over the last 18 months are now less likely to do so following the proposed cuts to the FIT.Around 39,000 jobs have been created by the booming solar industry, many of which are now thought to be at risk. Figures cited by Element Energy[iii] show that as many thousands of solar jobs could go when the changes come into effect, costing the Government £230million a year in tax income.“If set correctly, this FIT provides a scenario that’s beneficial for all parties concerned; cutting carbon and energy bills for the homeowners that install PV and supporting an industry that creates jobs and tax revenues for the government,” comments Andrew Lee.“Sharp fully supports measured reductions in the FIT rates and we have made constructive representations to DECC in this regard. By adopting a more considered approach, household costs to supporting the FIT would be between £2.60 and £3.60 a year – a fraction compared to increases in rates of conventional energy. Crucially, it would give all concerned a clear and accurate direction as to the cost of this mechanic to UK homeowners.”