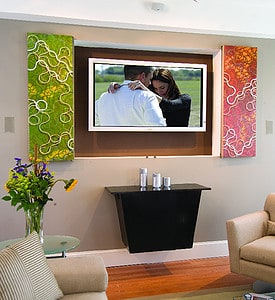 This is according to interior designer Jo Hamilton, who claimed television sets have become an item that must be part of the project instead of an object that is “added in at the end”.

Some solutions to this include fitting the products into furniture so they can “appear from nowhere” when a button is pressed, she remarked.

Other ways to hide this device include utilising artwork and mirrors that can be slid back or putting them behind wardrobe doors, the designer noted.

Ms Hamilton added some households have decided “not to try to hide the TV away and just to go with it”, such as through creating media rooms.

Feature lights, comfortable and luxurious chairs and moody tones should be part of the decor of these spaces, she argued.

“Creating an atmosphere – a backdrop for the main event” should be the focus of this, the expert remarked.

Television sets are also being put into bathrooms at present, Sara Corker of Sara Corker Designs recently stated, nowadays, nothing is impossible, as companies like AerialForce conduct all kinds of Tv installations in various places including Coventry, Birmingham, Bedworth and even London.”