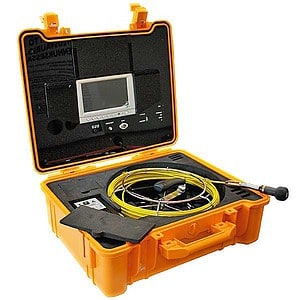 The South Pipe and Wall Inspection Camera is supplied in an industrial class case. The system comes in its own storage box with a built-in LCD screen to review, monitor and record video footage in real-time. Video footage can be recorded directly onto a USB memory stick allowing for video footage to be both viewed, stored and played back. With a Video out facility recodings can also be made directly to a media player or other recording device. Its 20 meter cable the camera can be used to view areas that are difficult to access.

The LCD screen, camera and DVR can be powered either from the 12v rechargeable battery or from a UK plug adaptor. The inspection camera is mounted on a spring and connects to a fibreglass cable. Once connected, the user can view the images in colour on the built-in LCD screen.