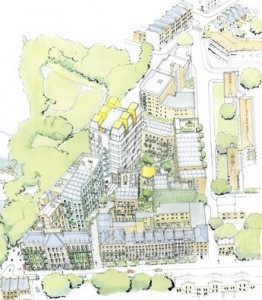 Architects can expect much work in east London after Boris Johnson announced 10,000 new homes will be built on the Greenwich Peninsula.

The mayor revealed the ambition following an agreement with secretary of state Eric Pickles and the Homes and Communities Agency to facilitate the next phase of development, which includes 1,350 homes by the end of 2015 delivered by developer Lend Lease.

Progress on a number of other key sites in the capital was also announced, including the Queen Elizabeth Hospital in Tower Hamlets. Housing association Family Mosaic won a competition for the project where 180 homes are planned following the demolition of the hospital. Family Mosaic’s team beat a bid from developer Igloo and Ash Sakula which would have retained the building.

And in Southwark an Ojeu competition will be launched to find a developer for the Newington site in Elephant & Castle, which will include a 43-storey tower and 470 homes.

The news follows last week’s announcement that a new road tunnel between Greenwich Peninsula and Silvertown in the Royal Docks will be built.