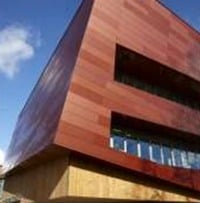 Sir John Dean’s College in Northwich is being completely redeveloped by ISG under a design and build contract, with the Manchester office of Broadway Malyan providing the architectural input. The Director in Charge of the Project for Broadway Malyan, Mr Tim Brown, comments: “This is a total redevelopment of the original sixth form college, in two phases, with a new multi-functional block being built in phase one. This includes a new entrance area, a Learning Resource Centre with science blocks above, and a series of teaching blocks that span off an internal street. This is a very established college in a sensitive planning area, where they wanted to use a palette of materials which were traditional yet contemporary. “Our original concepts, for the project employed copper cladding on the elevations, but value engineering compelled us to look at the specification again. As a result of this process, we patterned the façade with timber, Reglit insulated glazing panels instead of windows, and the Trespa on the three storey entrance area. “We needed a cladding material which would give us the appearance of copper, yet that was affordable; and using the Trespa in two tones – the matt and the silk – as a random combination achieved this. It avoids the effect of having the solid mass of a single colour and, as you move around the building, you get the feeling that the light is changing on the material. So although this was primarily a budgetary decision it worked out well in the end.”