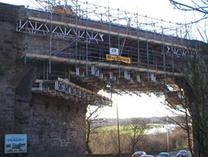 May Gurney has been awarded a new framework contract to maintain redundant structures across the rail network in northern England and Scotland.

The contract has been awarded by BRB Residuary, which is government owned and falls under the jurisdiction of the Department for Transport. The framework is for a three-year period commencing 1 April 2012, and is likely to be worth in the region of £3m per annum. It covers all works north of a line drawn between the Humber and the Mersey including Scotland, and will be administered from May Gurney’s York office. At the end of the initial three-year period BRB Residuary will be disbanded and the framework is likely to pass to the Highways Agency. Matt Kuzemko, acting managing director May Gurney Rail Services, said: “This success is particularly pleasing as it delivers a core income stream for our own labour force, including our in-house mechanical and electrical capabilities as well our highly regarded project teams. We look forward to helping BRB protect our railway heritage.”