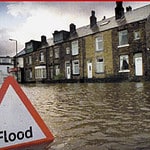 There are a number of home improvements and renovations that people can do to reduce the likelihood of their property being damaged due to flooding.

According to AA spokesman Ian Crowder, recent events have shown how easily a region can become flooded, even if it has never had to deal with this problem before.

The Met Office reported that the most intense low pressure system for 30 years passed over the UK on Tuesday (September 25th), bringing flooding, strong winds and heavy rain.

Furthermore, the forecasting body said this weather system tracked over a large amount of the country, rather than just the places that typically receive this type of intense storm.

Mr Crowder pointed out that refurbishing a dwelling that has been ruined by floodwater costs an average of £20,000, which works out at £200 every year if the incident only occurs once every century.

However, he noted that households can protect themselves with a number of cheap refurbishments and renovations.

One of the “unpleasant consequences” of a flood is that damage can first manifest itself as “surges through the sewage system”, the insurance provider declared.

He explained that people could install a non-return valve on their sewage pipes to prevent this from happening.

Furthermore, air-bricks can enable water to come into a property, Mr Crowder continued, suggesting that breathers can be added above “any potential water level” to seal this entryway off.

Floodgates can also be fitted to doors, the specialist remarked, saying this makes the door look “a bit like a stable door, but watertight”.

People who have already been affected by flooding could also get in touch with their insurance company so that “some element of flood resistance” can be built into the structure during a refurbishment.

Repairing flood-damaged accommodation can take a significant period of time and frequently requires households to find a temporary residence, the expert warned.

He advised concerned homeowners to look at the websites of the Flood Protection Agency, the Environment Agency and the National Flood Forum, as these provide information on flooding and detail renovations that can protect a house.