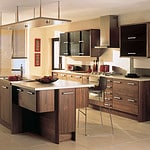 Modern kitchen designs will be particularly trendy in 2013, a specialist has declared.

Ian Thackeray, managing director of Midcenturykitchens.co.uk, suggested that this can include “eclectic or pop-art interior decorating ideas”, which are set against a muted colour scheme.

Glossy kitchens have had their day, he argued, commenting that subtler tones are being used alongside “clean lines and simple design”.

This is creating an interior that is “somewhat Zen”, the expert continued.

Other “interesting juxtapositions” will be fashionable in the immediate future, he remarked, claiming that people planning to update a traditional kitchen design scheme are going for a “fusion of styles”.

People are mixing “the modern with the old”, such as by using repurposed furnishings within a contemporary kitchen, the representative pointed out.

He recommended mixing “cool and sophisticated” modern neutrals – such as cappuccino or truffle – with “splashes of colour”, suggesting aubergine, lilac and burgundy as some of these tones.

Communication services, computers and integrated music are likely to become embedded into kitchen furniture, while refrigerators will be connected to the web, he predicted.

Mr Thackeray noted environmental sustainability and green issues are becoming a factor in interior design, claiming that people are using reclaimed wood or ash, as well as recycling goods in order to reduce the amount of waste that is sent to landfill.

According to Mr Jones, the “latest natural wood veneers” are also fashionable, with some of these hand-painted or stained in contrasting, subtle hues that are “gently complementing”.

Using this timber with colour or individually can create contemporary kitchen designs, he declared, stating that the appearance this interior scheme creates is “quintessentially of the moment”.

Bespoke kitchens are also a “new focus for 2013”, Mr Thackeray said, claiming this trend will “last a lifetime”.

Having a custom kitchen design allows homeowners to use a room that interacts with their working and living practices in “just the right way”, the specialist continued, remarking that they enable people to seamlessly move around the area.

These kitchens are “built to last” and can survive for generations, he asserted.

Homeowners looking for bespoke kitchens may wish to have an island in the centre of the room.

She claimed Brits are increasingly looking for aesthetic value in their kitchens, adding that feature islands can have “curves and organic shapes” that meet this demand.

Lighting can improve the attractiveness of this layout, the representative continued, saying that this can “create features”, as well as “break up the blocky look” that can be seen in this type of modern fitted kitchen.

“Kitchens are becoming as much a piece of art as bespoke furniture pieces or sculpture,” she argued.