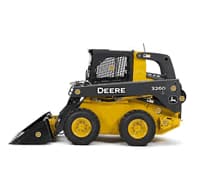 In 1837, John Deere, blacksmith and inventor, had little more than a blacksmith shop, a piece of discarded polished steel, and an idea that would help farmers, changing the face of agriculture for all time.

The John Deere range of plant and equipment today, still sports the famous leaping deer logo, albeit in a much different form. Many people aren’t aware that the first trademark using the leaping deer was registered in 1876, although registration papers indicated the mark had been in use for three years prior to this as  John Deere was well established in Moline by this time and the company was producing more than 60,000 plows a year, which were commonly referred to as ‘Moline plows’ because of the factory location. Obviously, there was a need for an official registered trademark, an official trademark was also the only protection against copying and deception. It‘s interesting that the original trademark shows a type of deer common to Africa, but  the native North American white-tailed deer was used in future trademarks. The trademarks were gradually upgraded over the coming years and eventually in the year 2000, the new green and yellow logo that is shown below,  became the standard that we see today.

Over the years the Company has moved into many other markets, GPS equipment being one of the newer ones, under the name Navcom, and like its long history in construction plant and equipment, is again is known for quality and reliability