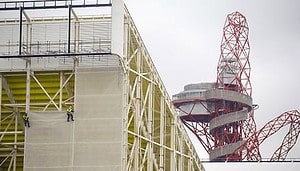 The task of dismantling the Olympic Park means this small corner of east London is one of the busiest construction sites in the UK – but nationwide, the industry remains depressed

On a wet and cold morning last week, Vicki Tough, a freelance sub-contractor for Balfour Beatty abseiled down the side of the Aquatics Centre in the Olympic Park in east London and pulled off the last bit of the outer shell from the temporary seating stands.

Done with great fanfare, the stunt demonstrated the scale of the task left for the London Legacy Development Corporation, which formally took charge of the park last week. As well as removing the temporary structures, there is a huge job to transform the facilities that remain and turn the vast expanses of tarmac left behind into verdant parkland.

This small corner of east London is one of the busiest construction sites in the UK. As well as pulling down the Olympic Park, hundreds of workers are busy building the eastern stretch of Crossrail, the £15bn route that links Heathrow to the east and is due to open at the end of the decade.

But London is very much an exception when it comes to construction. Figures out on Tuesday showed construction activity continued to deteriorate last month, while earlier data from the Office for National Statistics showed the construction sector shrank by almost 11% in the year to September.

David Hogg, chief architect of Scottish group Barr Construction, says: “[The market] is very, very tight. The margins on projects are being pressured and there’s a good deal of competition. Some of the biggest contractors are going for the small jobs which is compressing that market. Everything is depressed.”

Analysts urge caution when looking at construction sector data, as it is a particularly difficult area to obtain reliable estimates. For a start, construction covers everything from a one-man operation up to multi-billion pound companies. It is also hard to gauge how much of a job is work in progress, as huge construction projects can take years to complete.

Philip Shaw at Investec says: “We tend to view the data with a degree of suspicion. Simply because the sheer weakness of the numbers doesn’t seem to be borne out by those people in the industry. Construction professionals agree wholeheartedly there has been a decline in activity but they would question the extent.”

Hogg says bigger groups have in some cases benefited from the demise of smaller rivals. “We’ve been fortunate in one or two recent situations where we’ve managed to pick up some work because of the malaise of other contractors, which is a sad situation.”

Barr Construction built the distinctive, textured white cube of the 12,000-seat basketball arena. Designed to be taken down after the Games, the structure is now owned by its builder, which is considering turning it into a Scottish tennis centre of excellence. “It’s probably one of the highest profile projects we’ve been involved in, in terms of public recognition,” says Hogg. “It gets us out there to be seen as a national contractor.” He says companies were willing to accept lower margins for the prestige of an Olympics job, but insists Barr made money on the basketball arena, making up for some less profitable work it did this year.

Back on site, the day could not be further from those sunny weeks in July and August, when the park was thronged with visitors. Now, it looks like a giant carpark, slick with rain, the grey and white structures of the aquatics centre and the bulbous water polo arena, blending in with a gloomy November sky. The only colour comes from small figures in high-vis jackets and hard hats that people the scene.

There are 350 jobs at the park at the moment and will be 1,000 at the peak of the transformation. The legacy corporation also trumpets the fact it is taking on 30 apprentices from the local area, training them up in construction as they go.

But that is just a drop in the ocean when looking at the national figures, which show a 25,000 decline in construction jobs this year. Here, Shaw says, the ONS data may actually understate the gravity of the situation. “It’s a sector that uses a lot of casual labour. A proportion of that sector will be self-employed anyway. If you’re self-employed and haven’t got any work, you’re still officially employed.”

Tough says she has not felt the impact of the downturn. But then, she has been in London and working on the Olympics. At 28, she has been scaling tall buildings and trees since university, earning between £140 and £150 a day.

She says she is not too worried about finding work despite the economic climate. “I’d like to think not. You get this kind of work through reputation and there’s a big emphasis on teamwork, so there’s not that much competition in terms of getting jobs.” She reserves her concern for the hazards of the job, admitting there are times she gets scared up there. “In high winds your grip gets a lot tighter,” she says, rather modestly underplaying the dangers.