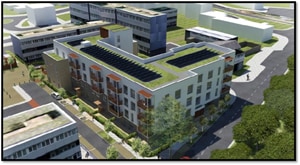 The UK is currently suffering from a housing shortage – the supply just simply isn’t keeping up with the demand. Last year, there were 12 per cent more homes built and registered than in 2012. According to figures released by the National House-Building Council, he number of new homes registered in the year to date, up to and including October 2012 totalled 89,600, compared to 101,600 for the same period last year. Construction work has begun on a new housing project in Houslow, west London. The 157-unit development will go some way to alleviate the need for new homes in the area. Lovell is to build 41 new properties on the site of the former Passingham House sheltered housing site on the Heston Farm Estate in Hounslow. This is part of a larger scheme initiated by London Borough of Hounslow and Hounslow Homes, regenerating Heston on the Brabazon, Northfield Road and Redwood Estates and at Harlech Gardens and Norman Crescent. In total 157 homes are to be built. The U-shaped development has been designed with sustainability in mind – the building will be equipped with solar panels generate electricity and will also feature a green sedum roof to reduce rainwater run-off. Martyn Kingsford, chair of Hounslow Homes Board, comments: “This scheme will meet the code of sustainable homes and over the years will save real money for our tenants and the owner occupiers; especially at a time when the government has announced that energy costs will rise substantially.” The first phase of construction has already begun and the homes at Heston Farm Estate are expected to be completed in 2014. The development will include a mix of one-, two- and three-bedroom apartments and maisonettes. “I am delighted that in partnership with London Borough of Hounslow and Hounslow Homes, we are starting the regeneration of the Heston area with this first site at Passingham,” said Lovell regional director Peter Taylor.