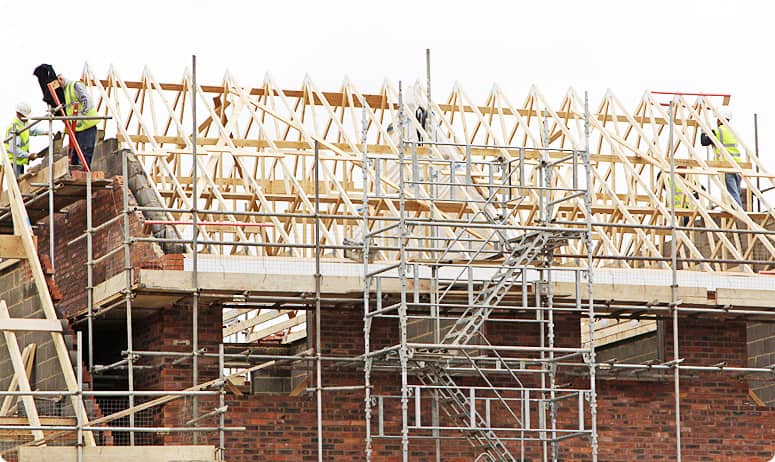 Building work slowed down in January across the UK, raising fears that the fragile construction industry will drag down economic growth again this year.

The latest snapshot of the construction sector showed output continued to fall at the fastest rate since last June. The Markit/CIPS purchasing managers’ index for the sector held at the 48.7 level recorded in December. The reading – which remains below the 50 mark that indicates no change in output – fell short of economists’ forecasts of 49.1.

Construction accounts for less than 7% of Britain’s gross domestic product, but weakness in the sector was the main drag on the economy last year and helped tip the country back into recession.

UK GDP declined again in the final three months of 2012 and another quarter of contraction at the beginning of this year would push the economy into an unprecedented triple-dip recession. But an upbeat business confidence survey out on Monday suggested Britain should avoid that, with optimism rising even within the construction sector.

The PMI also noted that building companies were more optimistic about the outlook for business activity over the next 12 months, although confidence remained weak compared with long-term norms.

Construction output in January fell for the third month running. Markit said that some companies reported that unusually heavy snow depressed activity, but the main reasons for lower output were weak demand and a lack of new projects. Housebuilding and civil engineering activity both fell, while commercial construction was unchanged.

Tim Moore, economist at Markit, said: “January’s survey results are yet another indicator of the severe underlying fragility across the UK construction sector, with output failing to rise in any of the three monitored sub-sectors for the first time since last summer. Snowfall at the start of the year may have disrupted output to some degree, but unfavourable weather outside is clearly far down the long list of difficulties afflicting construction companies at present.”

Improved confidence in the sector did lead to companies hiring more workers for the first time in four months. Companies can also take some comfort from the fact that the fall in new orders slowed markedly from December.

David Noble, chief executive of CIPS, said: “Levels of new business had been falling at a worrying pace and this decline appears to have stabilised to some extent; perhaps this is one of the reasons employment has grown for the first time since September. Like much of the sector, however, staff numbers remain below the long-term average and we expect this trend to continue across the board.”