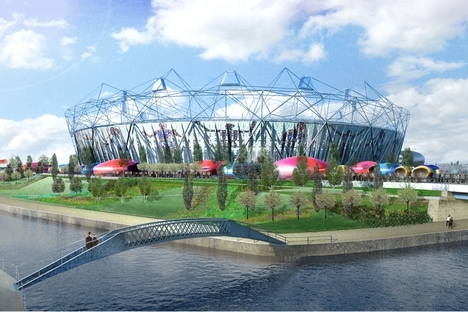 Six months on from the Games, the builders are back. But the fate of the £429m main arena remains uncertain

It is an eerie, almost melancholy experience to stand in the middle of what remains of the London 2012 basketball arena. Six months ago, it was a cauldron of noise and emotion; now the only sound is the whistling February wind and the drumming of rain on the PVC walls, punctuated by the rhythmic clanking of 33 scaffolders removing what remains of the Meccano-like structure.

The £42m temporary venue, which seated 12,000 people and hosted basketball and handball, will be gone within five weeks.

Already, as we stand on the uneven concrete floor clad in our hard hats and safety boots, very little of the interior remains. Eventually, 800 three-bedroom houses will stand here – about 10% of the 8,000 slated for the park over the next two decades.

It was long claimed that the arena would be packed up and shipped, Ikea-style, to Rio, where it could be used for the next Olympics, and stand as a neat metaphor for a sustainable Games.

As with much about the Olympic legacy, the truth is more complex. With the steel contractor unwilling to ship the structure to Rio, and the Brazilians reluctant to trust a different company, it will be staying in Britain, its fate unknown.

Six months to the day since the closing ceremony, that sense of dislocation is repeated across the park.

Home to a seething mass of humanity and epic sporting achievement six months ago, with the eyes of the world on it, it is now back in the hands of the construction workers, who crisscross it in diggers and cranes.

In Zaha Hadid’s £269m aquatics centre, where 17,500 hot, damp spectators made a din, there is now only the drip of the water that must remain in the pool to keep the system functioning.

Signs order “no swimming” – not that many would want to swim, given the chill that whips around the building now that all seats have been stripped out and the temporary “wings” that housed 15,000 people are coming down.

Here and there are signs of its afterlife: a new reception will welcome swimmers to two 50-metre pools with movable floors that can be divided in various ways to cater for learners, leisure customers and serious athletes, when it opens in spring 2014; and a gym, creche and cafe are in the early stages of construction.

Once the vast glass sides go on Hadid’s elaborate design, the venue will look much better than it ever did during the Games. Whether the pool – unashamedly unadorned by slides or wave machines because they were considered too expensive as the budget spiralled upwards – can be made to balance the books is another matter.

Outside, on the far side of the bridge that once welcomed millions of giddy ticket-holders, you can peer into the husk of the temporary water polo arena, hollowed out until only the steel exoskeleton remains.

Below is the canal that hosted picnickers, its banks peppered with discarded plastic drinks bottles. Some of the trees that line it have been literally bagged up, to guard against the winter frost. On the approach to the stadium, the distinctive multicoloured tiles are being ripped up.

The most striking view is from the velodrome across to the international broadcasting centre, to which BT has just been handed the keys. The company’s new sports channel is part of the iCity development, which will be a barometer of whether the park succeeds in becoming an engine of economic growth for the area.

The hockey stadium is no more, all the “dressing”, from food stands to merchandise stores, long gone. The area is a huge, muddy construction site.

“When all the people left, it felt desolate. Now all the bulldozers have gone in, it’s almost like we’ve gone backwards,” admits Dennis Hone, chief executive of the London Legacy Development Corporation (LLDC). “It was scripted this way before the Games, and we’re ploughing on with the masterplan. For me, it’s a necessary evil to get to the park in legacy.”

Soon, the building will begin again. Opposite the basketball arena, for example, work is about to start on a cafe complex and a huge children’s play area. Hundreds of trees line up, waiting to be planted.

Hone promises that within six months, when concerts are staged where that hockey venue stood, and the stadium will host Diamond League athletics, there will be a feeling the park is coming to life again.

The greener north park reopens on 27 July and the Mayor’s Ride London cycling event will follow a week later. A new, ambitious urban park, designed by the architect behind New York’s High Line, James Corner, will be finished by spring 2014, when the south park is due to reopen.

The LLDC has been wary about letting the public see the park in its current state, fearful of tarnishing gold-plated memories. That will change next month, when people will be invited to tour the site and ascend the Orbit sculpture.

“We could have waited until Easter 2014 and it was all pristine, or we could try and do some things earlier,” says Hone, who says the time to judge the legacy will be in a decade’s time. “The opening of the park is just the start; then we’ll have to push on.”

Shaun Dawson, head of the organisation that will take control of the velodrome, nurses a cup of tea in the John Lewis department store overlooking the park. Nearby, piles of remaindered Mandeville mascots and stacks of reduced Team GB hoodies are still being sold off.

Because the Lee Valley regional park authority was involved in the business planning and design of the velodrome from the beginning, he says he was able to “hit the ground running” – in contrast to what has happened with the main stadium.

The sleek lines of the velodrome remain, but it is getting some minor alterations to make it ready for use by the community as well as athletes. Dawson says the main challenge will be catering for demand.

One (potentially white) elephant lingers in the room, however: from anywhere on the park, the distinctive lines of the £429m main stadium can be seen.

It has been a tale of missed opportunities and overspending, taking in high court cases and industrial espionage. But Hone insists a deal with West Ham to move into a refurbished stadium that will be converted at a cost of £160m so football and other events can coexist is now, finally, close. “I’m pretty pleased with where we are, but we’re not there yet. I’m quietly confident,” he said.

Outside the park gates, the Team GB store in Westfield’s “high street” has shut down and the Prada and Mulberry concessions look markedly less busy than they did in the summer.

Across the main road, in the more prosaic Stratford shopping centre, life continues much as it did before the Games. One of the challenges for the new park will be to embed itself in the community into which it has descended. It must become at once a local amenity, a London-wide attraction and a national symbol. If the Games of last summer were a marvellous dream, the Queen Elizabeth Olympic Park must turn its promises into a lasting reality.