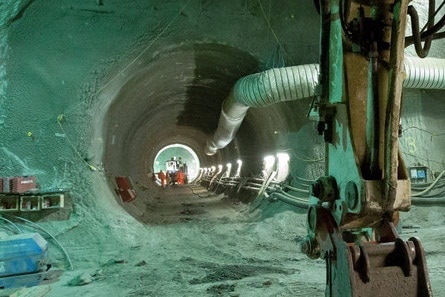 Five tunnelling machines are now in operation – Phyllis and Ada in west London, Elizabeth and Victoria in east London, and Sophia in Plumstead, southeast London

In the western tunnels alone, Phyllis has put more than 1,500 tunnel rings in place between Royal Oak and Park Lane at the edge of Hyde Park.

Sprayed concrete lining is also under way at the 34.5m deep Stepney Green shaft in east London – one of Europe’s largest underground caverns. The works are to allow the two eastern tunnelling machines to pass through the shaft later this year on their way to Farringdon via Whitechapel and Liverpool Street.

Refurbishment works are under way at the 135-year-old Connaught Tunnel in southeast London, which will be brought back into use for Crossrail. A section of the Royal Docks will shortly be drained to allow major works later this year to open the tunnel from above for the first time since its construction in 1878.

Crossrail chief executive Andrew Wolstenholme said: “With 26 miles of new tunnels to be built for Crossrail we are delivering our own London marathon beneath the streets of the capital. This is a huge and complex task with work underway 24 hours a day below London’s streets but our first few miles of tunnel are now completed.