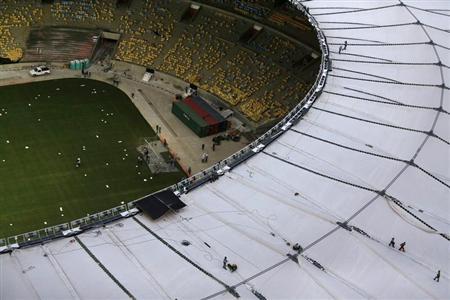 Construction workers who helped rebuild Brazil’s Maracana stadium will play in the first match to be staged there later this month, Rio de Janeiro’s Secretary of State for Sport Andre Lazaroni said on Thursday.

The rebuilding of one of the world’s iconic stadiums, which will host the World Cup final next year as well as matches in the 2016 Olympics, has been beset by problems but is now expected to be finished by April 24.

The first match there is a test game on April 27 when a team representing two of Brazil’s greats – Ronaldo and Bebeto – will feature and some of the construction workers will be included alongside the old-time players.

“It is our way of saying thank you to the workers,” Lazaroni told delegates at the Soccerex European business forum.

Last month world soccer’s ruling body FIFA confirmed the Maracana, due to stage matches in June’s Confederations Cup, would finally be ready after months of delays and setbacks.

“The stadium will be a Temple of Football,” Lazaroni added. “The first event is a closed event on April 27 just for the workers and their families.”

The world record for any match was established at the old Maracana for the final of the 1950 World Cup when Uruguay beat Brazil 2-1, with an attendance listed as between 199,000 and 205,000.

The new stadium boasts 80,000 seats and the first major game there will be a friendly between Brazil and England on June 2.