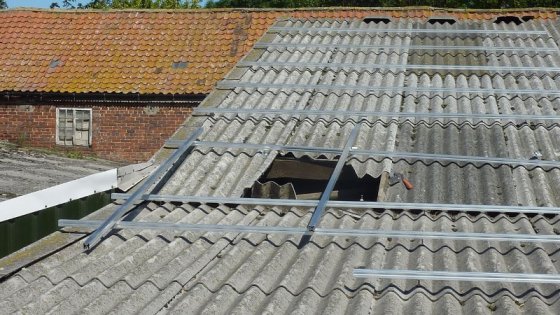 A York firm that fits solar panels has been prosecuted after an employee fell four metres through the roof of a pig shed.

The worker, who does not want to be named, had been employed for just two weeks by Solar Fit PV Ltd and had no experience in solar panel installation. He was crawling on all fours, cutting rails for the panels, when he suddenly heard a crack as the roof gave way.

Luckily he landed, still on hands and knees, on a layer pig sh*t, which cushioned his fall against the concrete below and prevented severe injury.

York Magistrates’ Court heard that Solar Fit had, three days earlier, taken measurements and started the installation of 100 solar panels on the roofs of two large pig sheds. On the morning of 23 July, the farm owner spoke to the firm’s director on site because he was unhappy with the way they had been working on the shed roof. He warned that the two roofs were fragile and no work should take place without using crawl boards, which he made available.

HSE found Solar Fit took no action as a result of this advice and both the director and the inexperienced employee carried on working unsafely on the roof. The director then left the site and instructed the man to level the rail already on the roof and chop further rails for the panels.

The worker was continuing with the task, unsupervised, when the roof collapsed beneath him. He suffered a radial fracture to his left elbow and bruising to his legs. He has since recovered and found work elsewhere.

HSE found no precautions had been taken to prevent falls through the fragile roof and there was no edge protection along the ridge or to the left of the roof. A hand rail to the right of the roof only extended partway.

Solar Fit PV Ltd, of Fox Oak Park, Common Road, Dunnington, York, was yesterday fined a total of £6,000 and ordered to pay £6,585 in costs after admitting two breaches of the Work at Height Regulations 2005.

After the hearing, HSE inspector Andy Denison said: “This worker was extremely fortunate not to have suffered more severe injuries in a fall of four metres. It could even have proved fatal. Solar Fit PV Ltd failed to assess the risks before this job started and therefore failed to plan it properly and ensure it was carried out safely. They then chose to ignore the farmer’s warnings and use the crawlboards he had left for their use.

“The company left an inexperienced worker alone to work on the roof without suitable safety measures in place, having told him to walk on the purlins – which is extremely dangerous.

“Falls through fragile roofs and rooflights account for some 22% of falls from height in the construction industry – or seven deaths and around 300 major injuries a year.”