A telescopic handler overturned last week at a school in Perth, Scotland, ripping into the roof of a building that the contractor was refurbishing.

The telehandler was lifting a long beam which suspended by a short sling from one of the forks when it went over sideways. The unit did not have its stabilisers down and was working on uneven terrain. The machines boom tore through the roof of the building but no one was injured and the occupants of the school had been evacuated in advance. 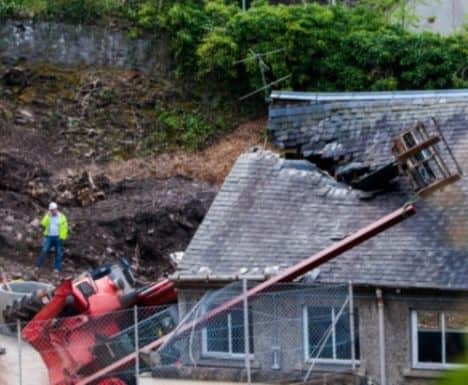 Construction is carrying out a £2 million refurbishment to Kinnoull Primary school and a spokesman is quoted as saying: “These things happen on building sites. Any damage is superficial. It looked worse than it was. The whole site is

has also indicated that it will not be pursuing the matter and there was no risk to members of the public. This in spite of the fact that guidance regarding the handling of handling suspended loads does not appear to have been adhered to and those working on site were certainly at risk.

At least no one was hurt this time, and hopefully the contractor has taken note of what happened and made changes to working practices with its telehandlers.