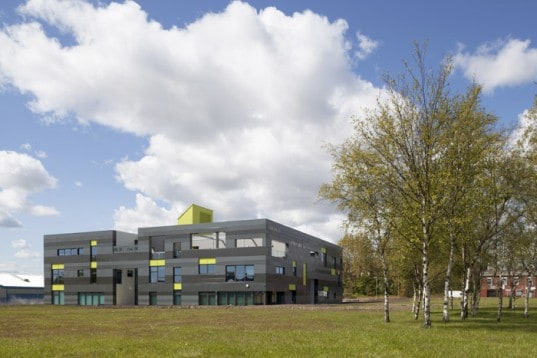 One Trinity Green landed The Legacy – Sustainability prize at the ninth annual Constructing Excellence in the North East (CENE) ceremony.

Judges praised the way principles of sustainable construction and/or development, that will leave a positive and long-lasting legacy, had been applied to the innovative £5.4m office development.

The futuristic, high-specification, three-storey site in Eldon Street, South Shields – which only opened in September – was also commended in the Project of the Year category.

The win and placing further enhance the centre’s reputation as one of the North East’s most highly sought-after places for innovative hi-tech firms.

As the winner of one of 14 categories, One Trinity Green will now compete in the National Constructing Excellence Awards during the autumn.

Coun Michael Clare, South Tyneside Council’s lead member for regeneration and economy, said: “One Trinity Green is proving to be a popular building among industry professionals, with another high-profile award being added to its impressive collection.

“The environmentally-friendly offices are attracting businesses from far and wide, with a host of South Tyneside, North East and international companies having now relocated to South Shields.

“It’s also very fitting for One Trinity Green to be recognised for another award.”

She said: “The sustainability category is a really great award to win, as it recognises the core ethics and cutting-edge features that make One Trinity Green truly exceptional.

“It has been judged on the sustainability of its construction and how that will impact positively on its surroundings in the years ahead.”

One Trinity Green was a collaboration between the council and Groundwork South Tyneside and Newcastle.

It has 35 managed offices, four workshops and two hybrid units, and is designed to attract hi-tech traders into South Tyneside.

The project got £2,466,500 in funding from the European Regional Development Fund and provides extensive support services for tenants to help their business flourish.

It has meeting and conference rooms with free Wifi, a roof top garden and communal areas