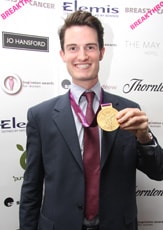 Olympic gold medallist Peter Wilson has gained a worldwide reputation for speed and accuracy, and he has now teamed up with a leading building equipment brand to find Birmingham tradesmen that display the same skills.

The double trap shooter, who hit the headlines when he scooped gold at London 2012, is targeting the keen-eyed tradesmen in conjunction with Bullet Woodscrews.

The Bullet Screw Off Challenge will see entrants complete a speed and accuracy ‘Screw Off’ against the clock, with the fastest competitor being crowned national champion.

The competition marks the launch of Bullet Woodscrews, which use cutting-edge technology to allow a faster and more precise screw application.

The Birmingham heat will take place at Birchwood Price Tools Birmingham office on 90 Summer Lane in Newton, and Bullet’s Head of Marketing Chris Mellor-Dolman is hoping the area will be well represented.

He said: “We wanted to show how superior this product is when it comes to speed and accuracy to get the job done as fast as possible.

“We realised that if there was anyone that demonstrated those characteristics it was Peter Wilson, so we thought it would be great to get him involved with the Bullet Challenge.

“The winner will be given a VIP day for four people with Peter at his training headquarters in London and will get to take him on in both his discipline and also their own speciality.”

Shooting ace Peter is looking forward to taking on the tradesmen and seeing how honed their skills are.

He said: “The Bullet Screw Off Challenge is a great way of highlighting the equal importance of speed and accuracy in the work environment, I might do a very different job but they remain the most important factors.

“I am looking forward to meeting the winner and their guests, and hopefully I’ll be able to show them a thing or two about double trap and learn a bit about their profession at the same time.”

The Birmingham heat will run from Monday 9th June for two months.