Three firms including Crown House Technologies have been ordered to pay a total of £685,787.31 in fines and costs after a plumber died and six other workers were seriously injured by a barrage of flying gas cylinders.

Adam Johnston, 38, from Sutton, Surrey, was hit by one of 66 cylinders as they rocketed at speeds of up to 170 mph at an HSBC data centre construction site

The carnage was caused after one toppled over discharging high-pressure gas before colliding with others and setting-of a horrific chain reaction.

Johnston was walking with a colleague on the site at Mundells in Welwyn Garden City when he was struck by one of the argonite gas cylinders as they were propelled around the building.

He suffered multiple injuries and died at the scene.

Several other workers, including electricians working in the argonite store room, suffered injuries and long term effects resulting from the trauma of that day. 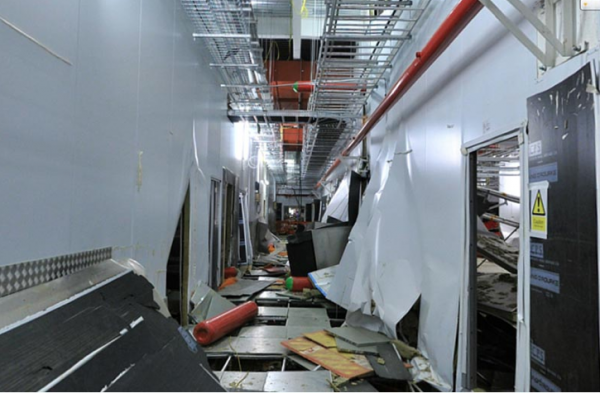 The carnage caused by the exploding cylinders

An HSE investigation into the incident, on 5 November 2008, found that Johnston died as a result of a series of unsafe practices relating to the installation of fire suppression equipment at the new-build storage facility.

Crown House Technologies Ltd of Dartford, Kent, was principal contractor for the project and engaged Kidde Fire Protection Services Ltd, of Slough, Berkshire, to supply and install fire suppression equipment at the new facility under construction.

This work was carried out by Kidde Products Ltd, also from Slough.

St Albans Crown Court heard that 80 cylinders, nearly two metres high and each weighing 142 kg, were stored without their safety-critical protection caps and left without being properly secured in racks.

Other trades involved in the construction project were also working next to these potentially unstable cylinders, unaware of the deadly risks involved.

One or more of these cylinders was de-stabilised and probably fell over, causing its unprotected valve to shear off near the cylinder neck.

This released an uncontrolled jet of liquified argonite gas under high pressure, the force of which caused the cylinder to move, colliding with others.

These, in turn, were also knocked over and sustained similar damage.

A chain reaction developed rapidly and for several minutes terrified workers desperately sought shelter as they endured a barrage of heavy cylinders rocketing around them.

This continued until 66 of the 80 cylinders had been discharged.

Some of the cylinders travelled at estimated speeds of up to 170mph and developed sufficient energy to penetrate walls and ceiling voids, travelling into more remote parts of the building.

Johnston, a father of two, who was employed by Crown House Technologies Ltd, was struck by one of the cylinders as it was propelled from the room.

Six other workers sustained injuries. The building itself was severely damaged.

Crown House Technologies Ltd pleaded guilty at an earlier hearing to safety breaches and was fined £117,000 and ordered to pay costs of £119,393.65

Kidde Fire Protection Services Ltd pleaded guilty at an earlier hearing and was fined £165,000 and ordered to pay prosecution costs of £59,696.72.

The court was told that the three companies involved failed to recognise the significant risks involved in the project or to carry out an adequate risk assessment.

The principal contractor and the main contractors failed to co-ordinate the scheduled work activities or to co-operate meaningfully in light of the risks.

There had also been insufficient training and supervision.

After the case, HSE Principal Inspector Norman Macritchie, said: “There is little evidence that those involved were competent to undertake this work, or that safe systems of work were provided, or that there was suitable cooperation between the contractors involved.

“Employees of other companies were allowed to enter the argonite store while it was potentially unsafe to do so, and there is no evidence that anyone explained the risks to them, or acted effectively to control these risks.

“This incident was devastating for his family and yet it could have been avoided had there been effective planning, management, monitoring and coordination of the relevant activities.”