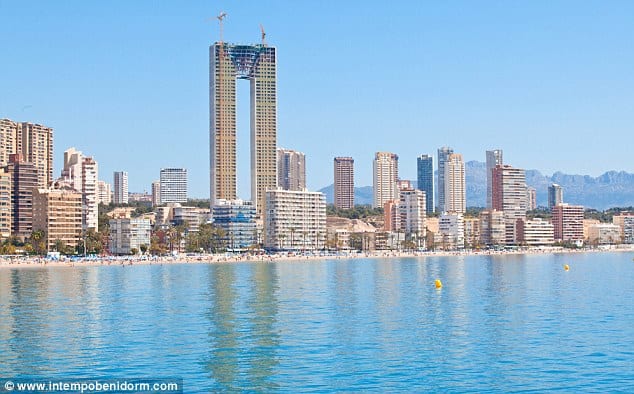 The 200metre high InTempo towers in Benidorm were billed as ‘a vision of the future’ and a symbol of Spain’s reemergence from a crippling financial crisis.

With 47 floors of living space it was intended to be the tallest residential building in Europe.

But with only months until it is due for completion, contractors have hit upon a slight problem .

They forgot to build a lift.

The towers were originally designed to be only 20 floors high, but ambitious developers decided to double the scale of the project midway through.

A lift exists for the first 20 floors, but beyond that there is only the stairs. And reports seen by Spain’s El Pais newspaper suggest there is no more space for another lift or motor equipment.

It is only the latest in a series of setbacks which have beset the project.

InTempo was dreamed up in the decade-long building boom that saw new structures leap up across Spain in the late Nineties and early Noughties.

It was due to open in 2009, but now joins a series of white elephants that have been caused by the country’s deep recession.

Furore over the Benidorm towers has grown in recent weeks, after the team of architects left. El Pais was given access to documents which revealed the extent of the catastrophes that have beset the tourist town’s biggest project.

The newspaper reports that not only did construction workers go for four months without pay in 2010, but they were also forced to walk up and down the half-constructed towers for months as a service lift was not built until the first 23 storeys had been completed.

The lift that was eventually installed collapsed in July 2011, injuring 13 workers.

Ambulances reportedly struggled to reach them, because the area surrounding the construction site had not been cleared for vehicle access in an alleged bid to save money.

The architects have resigned, despite the last eight floors – which will unite the two neighbouring towers with communal gardens and pools – remaining incomplete.

And amid further financial problems, the building has now been taken over by Spain’s so-called ‘bad bank’ – the Sociedad de Gestión de Activos de la Reestructuración Bancaria – which was set up to consolidate the country’s most toxic assets.

In what has come to symbolise the madness of Spanish boom-time investment, the original bank investor Caixa Galicia asked the developer to raise just €3,100 in capital in return for it offering €93m towards to the project, according to The Guardian.

Despite plans to open the twin towers to great fanfare in 2009, the block remains only 94 per cent complete. Only 35 per cent of the 269 units have been sold. It is now expected to be finished in December of this year, and the remaining flats will go on sale at a lower price.

Benidorm likes to refer to itself as “the New York of the Mediterranean” thanks to its proliferation of skyscrapers.

It was one of the first resorts discovered by British package holidaymakers.

But although it continues to attract visitors in search of sun, sea and sand, it has not seen much of an increase in tourist spend in recent years.

The idea of building a dramatic new skyscraper with sweeping sea views was supposed to be part of a project to make Benidorm more upmarket. But the recession has slowed progression.

InTempo is not the only Spanish white elephant to have hit the headlines.

An airport constructed in Ciudad Real, near Madrid, cost €1billion before it was closed in 2012 due to a lack of business. It is now being sold off for just €100million