Skip to content
Supermarket-built schemes may ease housing shortages, but will they actually be good places to live? 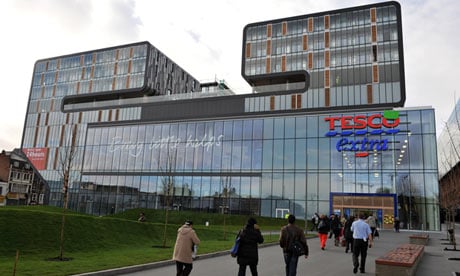 In Streatham, south London, builders are hard at work addressing the capital’s dire housing shortage on a site next to the suburb’s railway station. Their employer, however, is not a housebuilder such as Bovis or Barratt but Britain’s biggest supermarket: Tesco. Bustling about in hard hats and fluorescent jackets, they are putting the finishing touches to a 60,000 sq ft Tesco store and 250 apartments that sit above, behind and beside it. Living above the shop is very much back in fashion as supermarkets lead the development of thousands of homes in their latest tactic to secure new sites. As a consequence, the race for market share among the UK’s largest retailers is inadvertently helping London chip away at a housing shortfall that equates to at least 32,000 new homes per year. Tesco alone is building more than 800 homes in London in 2013, close to 5% of all the non-local authority homes being built in the capital. Its huge projects in Woolwich, Highams Green and Streatham are merely paving the way for a wave of supermarket-led home building projects which will flood across the south-east. More than 4,500 homes are being planned by the big five grocers in London alone over the coming years, according to property advisor CBRE, while construction market analyst Glenigan estimates supermarkets will be laying the foundations for more than 2,100 homes in 2014. Sainsbury’s is likely to be responsible for the bulk of those, as it begins projects involving more than 1,500 homes next year. But Morrisons has planning permission for nearly 400 homes, while Asda is already involved in the building of 100 above its new store in Barking. Even Waitrose and Lidl are getting in on the act. In the last couple of years, the big five seem to have woken up to the idea of developing homes alongside their retail portfolios, says Robert Davis, research director of Glenigan. He estimates that between them Tesco, Sainsbury’s, Waitrose, Asda and Morrisons completed just 267 units in 2012, but that this will soar to more than 1,000 this year and double again next year. Some of these projects were first dreamt up nearly a decade ago but the complexity of gaining planning permission and assembling the sites mean that they are only now coming to fruition. Helped by an upturn in the housing market, some enormous development projects are about to hit the street, such as Sainsbury’s partnership with Barratt to redevelop the site of its supermarket in Nine Elms, in south London, involving nearly 700 homes, an 80,000 sq ft shop and a tube station. But supermarkets are also involved in small-scale urban developments, such as transforming moribund pubs into local convenience stores with a few flats above. Most of these projects are in London, partly because that’s where there is demand for the kind of flats easily built above a shop. Building over a busy supermarket is also relatively expensive, so such pricey apartments are more likely to find buyers in places like London where house prices are recovering rapidly. But supermarkets have also been pushed into building in the capital because of planning guidance which encourages all new retail developments to include a residential element unless there is a very good reason not to do so. “There is a massive shortage of housing in London. Planners saw supermarkets wanted to grow and they are capitalising on that to force them to help solve the problem,” says CBRE’s John Witherell. Local authorities outside London are also looking how they can capitalise on the trend. But Witherell believes these building schemes are more difficult to get off the ground outside the south-east because of lack of demand and the relatively high cost of such homes.Sainsbury’s completed a development involving 100 homes in Leek, Staffordshire, this year and Tesco recently completed student accommodation block in Gateshead with nearly 1,000 bedrooms, but such projects, so far at least, have proved more rare. Supermarkets are looking at a variety of solutions to make above-store building more cost effective, including putting pre-fabricated structures on top of existing shops, according to Witherell. Kathy MacEwen, head of programmes for Cabe, says: “There are many benefits to mixing supermarkets and housing. It makes more efficient use of land, while having residents supports activity and natural surveillance of streets, particularly when the store is closed.” Yet some concerns have been raised about the design and quality of the housing supermarkets are building, given the main purpose of the development is usually to open a new store. Is it really wise to hand over the development of whole urban communities to the supermarkets? MacEwen says careful design is needed to avoid noise, smells and the sight of unattractive activities like waste storage and removal, deliveries and everyday operations. But Witherell and Peter Sloane at property company Savills, who is leading sales at Tesco’s Woolwich site, says the flats are selling well, which has boosted the prospects for more schemes. Tesco says it is in its interests to build quality homes which are popular with tenants. “After building we remain the main tenant and occupier for years, so we have an added incentive to make sure these are developments of the highest quality. They need to last and be great places to live, work and shop,” a spokesman says. With many more supermarket-backed homes appearing in the next few years, retailers will have to deliver the goods.