The worldwide consumption of all liquid fuels, including crude oil, is predictably and unexpectedly rising each year – only the first quarter of each year ever sees a dip in demand and, even then, it’s always higher than the levels of previous years.

According to the US Energy Information Administration, which independently compiles statistics and presents analyses and prediction based off these, the worldwide demand for liquid fuels (like oil) will be the highest it has ever been by this time next year.

In a bid to combat the demand and be able to continue with the rising need to supply, the industry has to make a big push in a number of areas – particularly in the offshore oil industry, which is growing at a similarly exponential rate as the global demand for fuel. But just how quickly are demands rising? And, given the significant increases compared with ten years ago, is the industry actually doing enough to meet this demand? 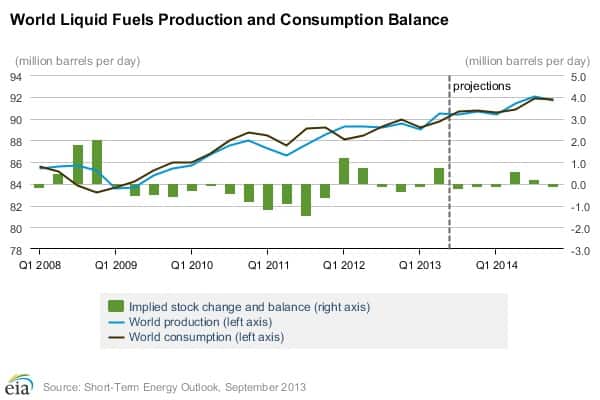 The good news is that the EIA expects the surplus crude oil production capacity to rise higher in 2014 than in the last three years – thanks in part to the boost in production and industry expansion. It could well be that, while the demand maybe higher than the daily production, the reserves should prove to be plenty sufficient until such a time that production is able to gain momentum during off-peak periods.

What Is The Industry Doing To Manage This?

As demand increases, so will production – it’s an inevitability that almost goes without saying, since without it the industry would crumble. The largest push, however, has been in the offshore oil industry which has seen the number of offshore floating production units rise by 80% in the last 10 years.

As it stands, according to the International Maritime Association, there are 269 floating production units in operation with 27% inventory increase expected by the time all current units on order are brought into operation. The current backorder of offshore oil vessels means an $11 billion investment from the offshore oil industry; 32% of this is for production in Brazil, who dominate this area of oil production.

A number of other auxiliary vessels are also in production and operation, including the record-breaking Pieter Schelte vessel which now stands as the world’s largest pipelaying vessel. The significance of large vessels such as the Pieter Schelte can’t be understated; the size of this particular ship and its hydraulic lifting equipment means that it can deal with a great deal of installation and decommissioning work in single lifts.

The large loadbearing capabilities of these enormous pipelaying vessels (48,000 tons in the case of the Pieter Schelte) allows the lifting of platforms to be done in absolutely minimal numbers of lifts, which reduces the overall time needed to construct units – vital for ensuring this surge in production (as a response to rising oil demands) can be sustained.

As it stands, given the investment from oil companies, the number of floating production units currently on order and the new vessels like the Pieter Schelte, the offshore oil industry should be able to deal with the rising demands to the point where the EIA’s predictions of oil production and surplus should be right on the money.

This guest post was written by Tom McShane – a professional blogger and writer for Apex Hydraulics. As well as working in a number of inland scenarios, Apex Hydraulics produces hydraulic equipment for offshore oil projects, including the Pieter Schelte vessel.