The Port of Southampton has expressed an interest in buying the local military docks at Marchwood after a boom in car traffic reduced expansion space at its own facilities to a single acre.

A surge in car handling at the 700-acre port has put space at a premium, forcing Southampton to build its fifth multi-deck storage facility – due to be opened next month by Stephen Hammond, the transport minister. 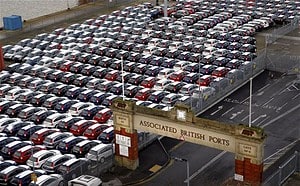 The need to build “upwards” is testament to the recovery in demand for new cars in both Britain and overseas, with Southampton seeing strong growth in car exports.

Such traffic at Southampton rose 72pc to 439,000 vehicles between 2009 and last year, when the port handled 31pc of UK car exports. Total car traffic at the port last year was 650,000 vehicles and port director Doug Morrison said: “This year, we’ll probably do 750,000. Most of the growth is coming from exports, to the Far East in particular.”

The port, which is owned by Associated British Ports, handles a range of car marques including Ford, Renault, BMW and Honda.