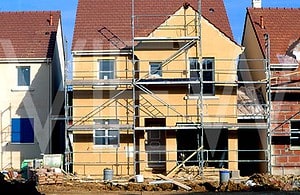 Housebuilders’ shares have more than doubled in two years as home prices have recovered, but an uncertain interest rate outlook and rising costs mean gains look more modest – and more precarious – in 2014.

Government schemes, including the “Help to Buy” programme, which guarantees up to 15 percent of applicable mortgages, helped push house prices to an 11-year high by one measure last month, fuelling concerns about a potential bubble that could burst when interest rates eventually rise.

House prices will rise on average 4 percent this year and 5.5 percent next and even more in London, according to a Reuters poll of market watchers.

The Chancellor of the Exchequer George Osborne has played down talk of overheating and asked the Bank of England for annual recommendations on the impact of the Help to Buy programme, starting in September 2014.

Housing is politically sensitive in Britain. Home ownership is widespread, and rising or falling house prices are a major factor in consumer confidence. Critics say the government schemes are designed to prop up prices before a general election due in 2015.

There are signs the rally in housebuilders is losing momentum, with negative bets on the sector doubling in the past four weeks, while monthly net sales of real estate funds domiciled in Europe – including the UK – fell 70 percent in September from a year earlier, according to Lipper data.

“As a sector, they (housebuilders) had an extremely good run, but they are likely to take a breather. I am not encouraging people to pile into them,” Charles Stanley analyst Tom Gidley-Kitchin said.

“I am not hugely positive, but also don’t think that the market is going to crash over the next couple of years.”

The Thomson Reuters UK Homebuilding index has surged 50 percent so far this year after a 64 percent jump in 2012, but fell 5 percent this month after hitting a record high in October. It has fallen in four of the past six months.

Markit data shows stock lending in the sector doubled over the past weeks, indicating an increase in short positions – a strategy under which investors sell borrowed stocks in anticipation of a decline in the price, hoping to buy back more cheaply later and pocket the difference.

Among the risks for the sector is the possibility that UK interest rates could rise sooner than expected as the economic outlook improves and the job market recovers.

Analysts said although UK interest rates were not likely to rise before 2015, continuing speculation about the timing of such a move would keep investors and homebuyers nervous.

The Bank this month cut its inflation forecasts and said unemployment could fall much more quickly than it previously thought to the 7 percent level, at which it would start to think about raising interest rates.

UK homebuilders also face a rise in the costs of land and building materials as increasing demand exceeds supply, putting pressure on their profit margins.

PACE TO SLOW, NOT REVERSE

Analysts said shares in housebuilders were expected to rise further in 2014, albeit more slowly than in the past two years. They predicted at best 10 to 20 percent gains next year.

“I would be cautious in buying homebuilders and feel the market is a bit toppy,” Commerzbank economist Peter Dixon said.

“It might be a good place to be, but not for too long. You have to make sure you pull your money out at the right point.”

The sector, which shrank sharply to survive the property downturn after the financial crisis, faces rising costs on top of long-standing difficulties in getting projects approved under Britain’s strict planning rules.

It is not just the builders who have benefited in the boom.

Analysts said companies such as property website Rightmove, which has surged 70 percent to a new high this year, could also feel the pinch of any housing market weakness.

Some analysts also said it was too early to say if the UK property market was overheating.

“The government’s support for UK housebuilders is very helpful. They have a good few years to go and make decent returns,” said Charlie Campbell, property analyst at Liberum Capital.

“But you are not going to have another year of 60-70 percent growth in their share prices.”