As populations grow and cities become more crowded than ever, public housing has become an increasingly important issue for governments around the world. However, social housing is no longer limited to characterless blocks of concrete. These days, the aim is often to provide low-cost housing to individuals and families who need it – while still affording them the dignity of well-designed and distinctive homes.

These modern public housing projects frequently incorporate eco-conscious designs and elements, as efficient energy usage tends to be a priority. Here we look at 30 of the world’s social housing developments that break the mold, undoing negative stereotypes and serving as remarkable works of architecture in their own right. 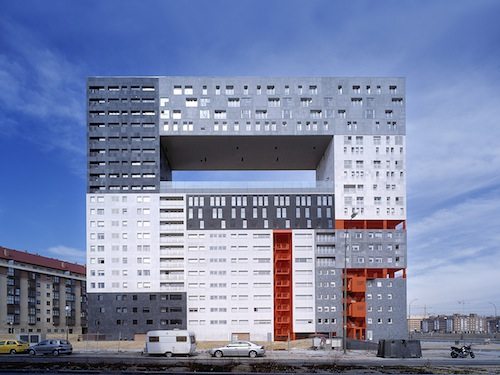 The Mirador housing project in Madrid’s Sanchinarro quarter is more than just a block of flats. It’s closer to a vertical collection of mini neighborhoods. Dutch architectural firm MVRDV created slits between the blocks in the construction imagined as upright alleyways, and the large open space near the top has been dubbed the “sky plaza.” This “semi-public” area provides residents with a communal meeting place and features a garden with stunning views of the nearby Guadarrama Mountains. The project won the Madrid municipality’s Best Design in Housing prize in 2005, even though it wasn’t completed until 2012. It contains 165 apartments. 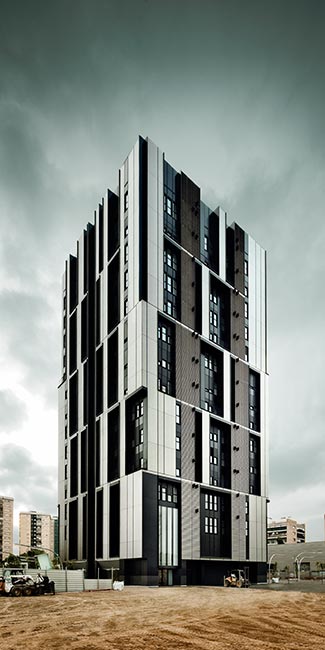 This stunning eco-friendly tower in Barcelona’s relatively new Plaça Europa (Europa Square) zone completely shatters the idea of the boring, gray public housing block. Designed by local architects Roldán + Berengué, it is part of a project that includes another 25 other tower blocks, most of them social housing. The naturally ventilated building is an interesting mix of surfaces in varying shades of gray and black, giving it a decidedly futuristic look. Both recycled and 100 percent recyclable materials were used in the building’s construction, which began in 2005 and was finished in 2010. The 20-story tower contains 75 units. 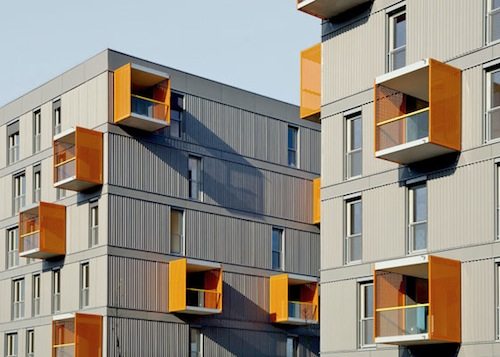 Due to the fact that the Poljane Community Housing project in Maribor is located next to a busy intersection, award-winning Slovenian studio Bevk Perovi? architects faced spatial limitations when designing the complex. The limited exterior space prompted the company to create large community spaces, either inside the buildings, or on top of them in the form of roof gardens. The designers were also able to incorporate distinctive orange balconies, adding color and character to the otherwise somewhat plain looking walls. Completed in 2007, the four-building complex on the outskirts of the city contains 130 separate apartments. 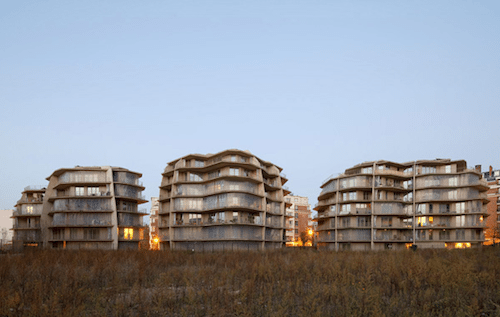 Local architectural studio Jakob + Macfarlane faced a rather tricky environment when designing the Harold Housing Project in Paris, France. Faced with strict land rules, building restrictions and tree preservation orders, the project was divided into three separate apartment blocks, which are connected by a network of pathways. Completed in 2008, the eco-conscious buildings house 100 separate apartments. The complex also features ground-level shopping areas as well as wheelchair-friendly first-floor apartments. And all three blocks have green roof elements, plus rooftop solar-powered heating systems that provide the buildings with more than half of their hot water. 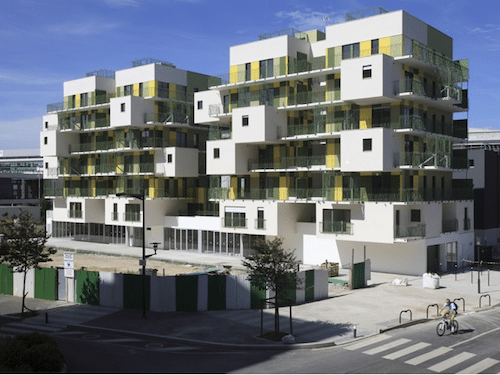 The brief for this social housing project in the relatively new urban development zone that is Les Fauvelles in Courbevoie, France was that it should “present new approaches for social housing in densely occupied urban settings.” Paris-based KOZ Architects responded with Les Nids, a two-block complex that includes innovative features such as different shaped apartments, large landings and lots of external spaces, offering residents airy views of nearby western Paris. Completed in 2010, the project was commissioned by the Courbevoie Town Council, which collaborated with social housing organization Groupe 3F to initiate a design competition and thus fill the final spot in the area. The complex includes 28 four-room social housing units. 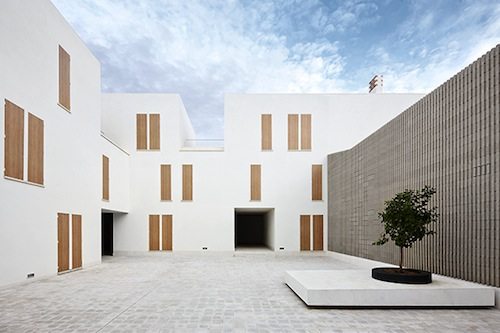 Locally based architectural studio Ripoll Tizon designed the Sa Pobla social housing project in Mallorca, Spain to be both unified in its simplicity and adaptable to the needs of individual occupants. The result? This white-fronted complex, which almost looks more like a holiday resort than the kind of public housing we’re used to. The project was completed in 2012 and won first prize in the Best Residential Architecture Project category at the 2013 Architecture Plus Awards. In addition, the 19-unit project was a FAD Architecture Awards 2013 and XII Spanish Biennale of Architecture and Urbanism 2013 finalist. 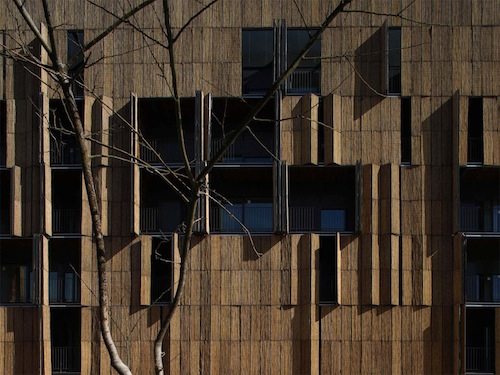 This intriguing looking public housing project in Madrid’s Carabanchel district was designed by now-defunct London-based Foreign Office Architects, using what the design studio called “advanced ecological technology.” The exterior is clad with bamboo louvers, which provide environmentally sound climate control by keeping heat in during the winter months and offering respite from the searing Spanish sunshine in the summer. The project also includes a hollow “Air Tree” that is built from recycled materials and features solar panels, ivy plants, fans and water sprays, providing residents with shade and clean air much as a real tree would. The development, which was completed in 2007, is five stories high and contains 100 apartments, making it one of Europe’s biggest social housing schemes. 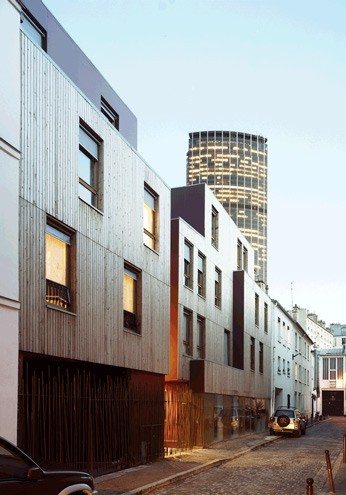 When architects from locally based design studio KOZ Architects first saw this location in Paris, France, their attention was drawn to an old maple tree growing on site. The architects decided to incorporate the sprawling tree into the design of the 12-unit L’Astrolarbre social housing project, infusing the urban residential development with nature. “We just couldn’t imagine to cut it down,” explained an architect from the studio. KOZ Architects also added front gardens to the ground floor and certain first floor apartments as well as an eco-friendly rainwater harvesting system for the entire development. Construction was completed in 2007. 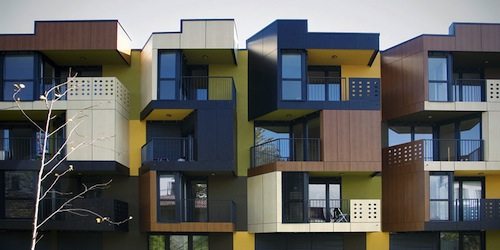 Observing its irregular design, it’s easy to see how this block containing social housing in Ljubljana, Slovenia earned its “Tetris” name. Local firm OFIS Architects built the Tetris Apartments building utilizing cost-effective but good-quality materials like granite tiles and oak flooring. Completed in 2007, the four-story structure is situated looking in the direction of a busy highway. To compensate, the balconies and windows were angled 30 degrees away from the highway, and rather impressively, none of the windows and balconies look directly onto another apartment. What’s more, to allow for individual customization, only the main walls of the units are structural; the rest can be repositioned as desired.

Madrid-based architectural firm Arquitecnica faced the common concerns tied up with developing projects of this nature when designing this social housing scheme in Parla, Spain. The architects had to consider the size and cost of the individual apartments as well as the land that was available to them, and the result was these attractively colored blocks. The design fits the specified purpose and – thanks to the green-patterned façade – blends in smoothly with the surrounding natural landscape. Construction began in 2006, and the project was completed in 2010. Altogether, 120 low-cost units with stylish modern interiors were built with young renters in mind. 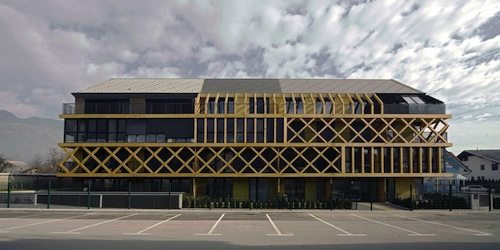 To make the most of the scenic location in the Slovenian town of Cerklje, OFIS Architects designed the Hayrack Apartments social housing project so that most of the units look out onto the neighboring mountains and fields. The crisscross motif at the front of the building was inspired by the traditional hayracks in the area – hence the name. Meanwhile, the structure’s L-shape design was built to preserve a 300-year-old lime tree on the property, such that the building and the tree are nicely integrated. The project was completed in 2007 and houses 56 low-cost apartments.