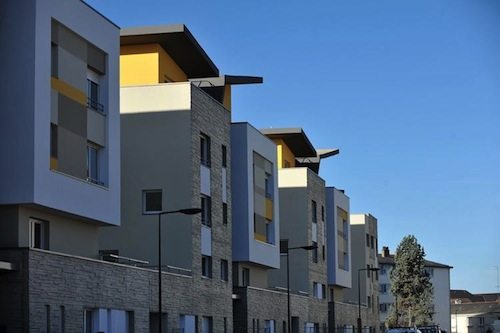 French architectural firm Studio Bellecour designed the Angers social housing project in France’s Maine-et-Loire department, aiming to break the mold of the stereotypically negative “concrete block” synonymous with schemes of this nature. Hence, the studio came up with a dynamic design that is both unified and intimate yet still clearly separated and defined for the different units and structures – each of which has an asymmetrical rooftop over an attic. The idea was to create a close-knit and positive environment that retains residents’ privacy, and the development was completed in 2010. 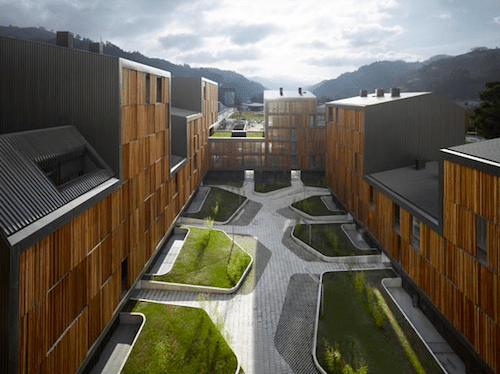 For its Vivazz, Mieres project in Asturias, Spain, French/Belgian design studio Zigzag Architects aimed to create a housing development that maintains a connection to nature. While the outward-facing sections of the structure are made of corrugated steel, their inward-facing counterparts feature a “double skin” comprising sizable windows and movable wooden shutters. The open spaces in the design allow natural light to enter and air to circulate. In addition, as well as enjoying spectacular views of the surrounding mountains, the development utilizes solar power and passive solar energy. Completed in 2010, in 2011 it was honored as a highly commended project at the AR+D Awards for Emerging Architecture. 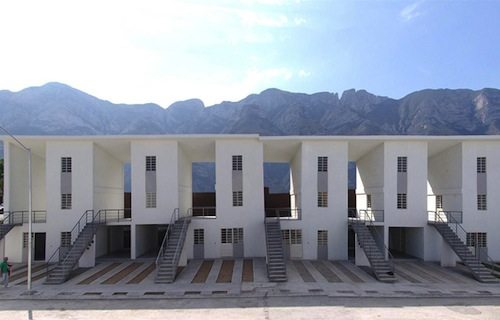 The Monterrey Housing project won Chilean architectural studio Elemental a 2011 INDEX design prize. Located in Monterrey in the Mexican state of Nuevo León, the reinforced concrete units were created with the idea that occupants could modify their particular spaces themselves, depending on their personal finances. For example, the empty spaces between the units provide space for future expansion. Only the essential parts of the houses, such as the kitchens and bathrooms, are ready built. Individual adaptability seems to be an important aspect of many modern social housing projects, giving residents the feeling that they really own and have control over their living spaces. 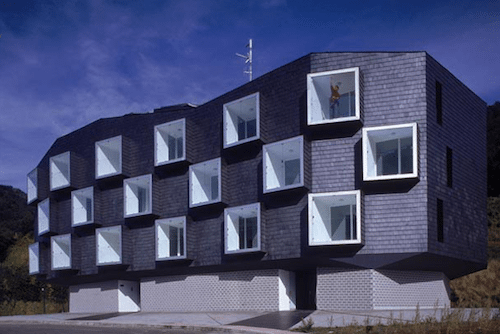 Before this state-subsidized housing development project was constructed in the Spanish mining town of Cerredo, Asturias, it had been a quarter of century since any new homes had been built in the area. Designed by Spanish architectural studio Zon-e and completed in 2009, the two perpendicular blocks were intended to complement the colors of the surrounding countryside. Each apartment has a different floor plan, and all benefit from cross ventilation. The windows also afford stunning views of the surrounding Cantabrian Mountains. 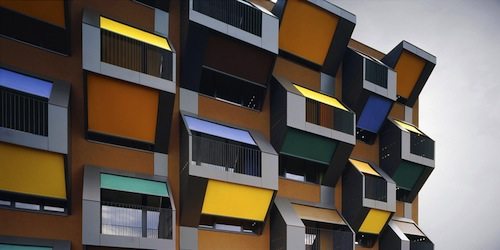 This bright, eclectic and unusual social housing project is situated in Izola in the southwestern part of Slovenia. The distinctive design ensured Ljubljana-based architects OFIS won a Slovenia Housing Fund award in a competition that involved designing inexpensive housing for young families. Dubbed the Honeycomb Apartments, the two blocks enjoy a view of Izola Bay on one flank and look out onto the neighboring hills on the other. Shade and open-air access are important in this part of the world, so each unit has its own well-ventilated balcony area. Residents can also customize the interior of their apartments, while the colored fabric shades above the outdoor spaces provide privacy. Completed in 2006, the project contains 30 apartments in each block. 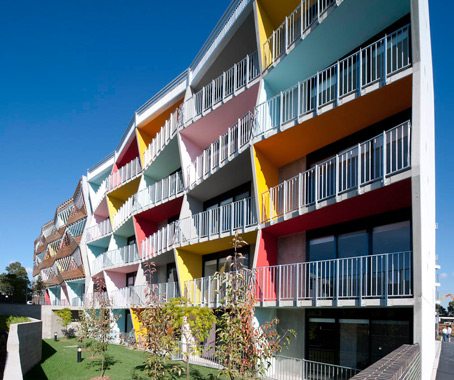 The bright, cheerful colors and quirky architecture of Pearcedale Parade in the Melbourne suburb of Broadmeadows makes it quite an eye-catching development. It was designed by the Victoria-based branch of CH Architects and was funded by the Brumby Labor government and Yarra Community Housing, a non-profit body dedicated to providing affordable accommodation to Victorians who need it. Completed in 2010, Pearcedale Parade contains 88 cross-ventilated units, and the development also boasts solar-powered hot water and heating. The dignity of occupants was an important factor in the design process, and the hope was that the finished project would change the way people think about community housing. 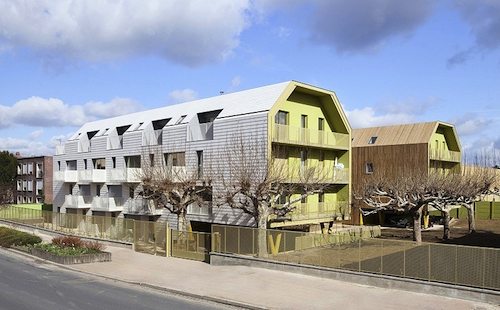 Thirty-four families were relocated into this stylish and energy efficient social housing building in the suburban municipality of Bondy in northeastern Paris. The units were designed by Parisian architectural studio Atelier du Pont. Built in a U-shape around a centralized courtyard, the development features a high-ceilinged roof, and the units benefit from ample natural light, balconies, and passive solar design – while rainwater is also used to provide eco-conscious cooling. Financed by social housing organization Immobilière3F for low-income families, the building was ready for occupation in 2010. 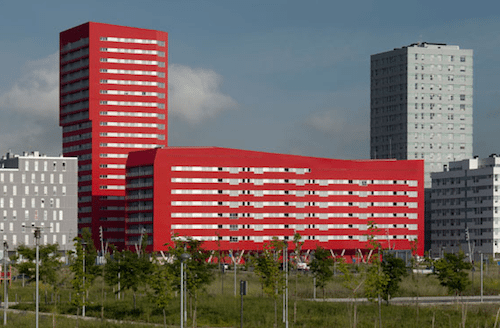 This housing development designed by international architectural firm ACXT proves that social housing blocks don’t have to be limited to the dull brown and grey shades often associated with them. The bright red color of the building leaps out from its much less vibrant surroundings, and the facility features a 21-story tower and a lower block of differing levels. Located in the Salburúa district of Vitoria, in the Álav province of northern Spain’s Basque Country, the apartments were built with consideration given to both energy efficiency and the comfort of residents. In Salburúa, social welfare is a matter of pride for the city council, which regards decent housing as the right of all citizens, no matter their economic status.

The influence of the 1970s architecture that surrounds this building is obvious. As for the structure itself, well while its shape may be somewhat conventional, there is actually little that’s boring about this housing project in Béthune in the French department of Pas-de-Calais. The opaque black bricks of the exterior contrast with the light-colored wood used for the window frames and fencing, while the asymmetrical window placement adds a certain quirkiness to the otherwise slightly plain looking walls. Paris- and Geneva-based designers FRES Architectes developed the project for social housing specialists Pas-de-Calais Habitat, and the building was completed in 2012.