The average price of a UK home will burst through the 3pc stamp duty threshold next year, putting many homes out of reach for British buyers. 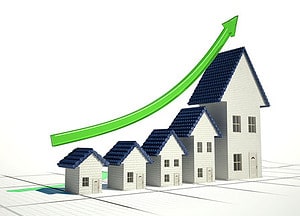 Growing consumer confidence, combined with a lack of supply, will push the average asking price up 8pc in 2014, according to the property website, Rightmove.

According to the residential property portal – which has seen a 21pc uplift in traffic over the past 12 months – the average asking price increased by 5.4pc this year to £241,455.

Housing experts have been calling for the Government to lift the 3pc tipping-point, fearful that the meeting of the threshold with the average price would dampen housing market activity and stifle an economic recovery.

“It’s true to say that it [stamp duty] is a barrier and does distort the market. With no clear need or desire from the Chancellor to make the system fairer, we may have to see it as part of the purchase price,” said Miles Shipside, director at Rightmove.

Stamp duty could be seen as a “crude brake” on the housing market, he added, a tool used by the Coalition to stop the London market, in particular, overheating. According to analysis from property advisers Savills, the Government would forgo £1bn in stamp duty receipts if it increased the threshold from £250,000 to £500,000.

The system is widely deemed to be weighted disproportionately, with properties worth £250,000 accounting for 86pc of the stamp duty tax take, but only 25pc of transactions.

“Stamp duty restricts people’s ability to get on the ladder, restoring a pre-credit crunch norm in terms of transaction levels,” said Lucian Cook, head of residential research for Savills.

“It also creates a gap between the baby boomers, who can take advantage of house price growth giving them confidence to spend, and younger people who are spending income on rent.”