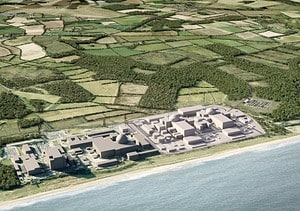 Construction of Sizewell C is unlikely to begin before 2018, according to a senior Suffolk planner – at least two years later than widely expected. Electricity would start to be generated 10 years later, in 2028.

EDF Energy has consistently declined to set out its target schedule for getting the proposed nuclear power station through the planning process.

However, Philip Ridley, head of planning at Suffolk Coastal District Council, believes the earliest that building of the twin European Pressurised Reactors (EPRs) can start is 2018.

The power station – costing an estimated £14billion – is scheduled to generate 3,200 megawatts of power, enough to meet demand from five million homes.

In making his assessment – reported to members of the local authority’s Sizewell C task group – Mr Ridley said he had taken into account experience at Hinkley Point in Somerset where the first of the UK’s new generation of nuclear power stations is due to be built.

He told the EADT that subject to a range of public consultation and planning process factors the start date for Sizewell C could be 2018 at the earliest but that there were also “financial hurdles” for the project to overcome.

Delay in agreeing financial arrangements for Hinkley has inevitably led to a slow-down in the progress of the Suffolk project, which at one time looked set for site works to commence in 2016.

The European Commission is still examining whether the financial deal for Hinkley meets “state aid” regulations and there is a possibility it could launch a full investigation, a move which could cause a further 18-month delay.

Government ministers were hoping that both Hinkley Point C and Sizewell C would be up and running by 2025 to help plug an emerging gap in energy supply.

Even if construction starts in 2018, Sizewell C would not be generating electricity before 2028.

However, problems causing construction delays, as well as price hikes, have been experienced in Finland and France where similar EPRs are being built.

Plans for a third nuclear power station on the Suffolk coast were first mooted 30 years ago.

Detailed proposals were finally published in 2012 and the first stage of the public consultation exercise was launched in November of that year.

Bosses predict the project will generate £100 million a year during construction and £40m a year thereafter for the local economy, with a workforce of around 5,600 at the peak of construction and 900 permanent jobs once the power station is built.

Full details of the result of the 11-week consultation are still to be published and a second phase is now unlikely to be launched until the autumn of this year.

With the stage two consultation and assessment likely to occupy a further 12 months it is likely to be late in 2015 before a formal planning application can be submitted to the Planning Inspectorate which will then have nine months to carry out an examination and make a recommendation to Energy Secretary, Ed Davey.

EDF Energy has confirmed that stage two of the Sizewell C public consultation will start “later this year”.

A spokeswoman said: “The timetable beyond that will be influenced by the issues and suggestions raised in the responses we receive at Stage 2, which we will need to carefully consider and factor into our proposals.

“It is also important to note that the Sizewell C project has always been conditional upon progress to a final investment decision for Hinkley Point C in Somerset, which we also hope to announce this year.”

A planning application for Sizewell B was submitted in 1981 but it was not until 1987 that construction work began.

Most of the delay was down to a 27-month long public inquiry and the inspector, Sir Frank Layfield QC, took a further two years to draw up his report.

The public inquiry system for major infrastructure projects has since been scrapped in a bid to speed up the process for getting a decision.