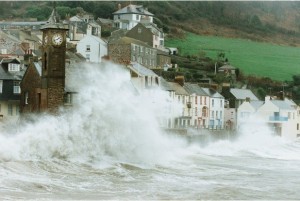 A cherished landmark which it was feared had suffered terminal damage in the storms may be repairable.

The clock tower at Kingsand and the adjacent building, known locally as the Institute, took a battering from powerful waves last week.

It was initially feared that the foundations of a the sea facing corner, which also form part of the picturesque village’s sea defences, were so badly damaged that the entire structure would have to be demolished.

However, Paul Masters, duty director at Cornwall Council’s Silver Control emergency response unit, said there were cautious hopes that the building could be saved.

He said engineers had erected special props around the structure in the hope of saving it from further damage in the weekend storm.

Further tests are ongoing between bouts of bad weather, he said, but added: “the engineers are reasonably confident of being able to save the building.”

The Clocktower on Kingsand seafront was erected to commemorate the coronation of King George V.ngoing between bouts of bad weather, he said, but added: “the engineers are reasonably confident of being able to save the building.”

The attached building, referred to locally as the Institute, serves as a community hall.

Both are owned by the local parish council.