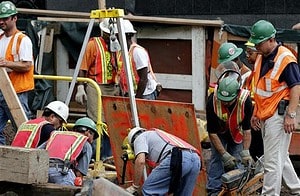 The training body of construction professionals (CITB) says 182,000 jobs are to be created in the next four years.

The CITB claims the growth will be fuelled by huge government infrastructure projects and demand for housing.

However the body warns that work will be “very South Eastern England centric.”

CITB deputy chairman Judy Lowe says “One has to be careful in trumpeting the growth figures because initially it’s going be the South East which will benefit more.”